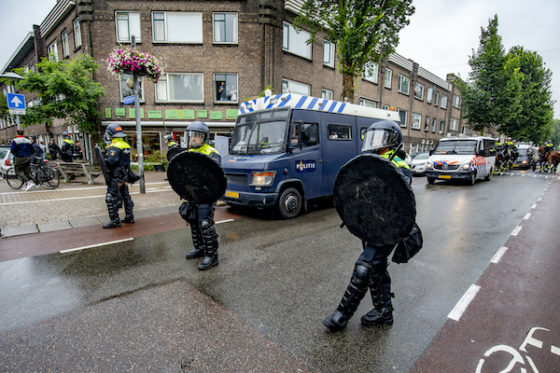 Several hundred people took part in anti-coronavirus marches in the Netherlands this weekend and dozens were arrested in clashes with police.

In Amsterdam on Sunday the demonstration was largely peaceful, as protestors met at the Dokwerker statue near Waterlooplein before marching through the city.

The protesters, about 500 in total, were calling on the government to drop its ‘pointless’ 1.5 metre social distancing rule which, they say, poses a serious limit to freedom.

Despite a large police presence, the atmosphere was positive, eyewitnesses said. In the early afternoon, city officials issued a call to people to stop coming to join the rally because it was becoming too busy.

Meanwhile in Utrecht, acting mayor Peter den Oudsten has said he was right to evoke his emergency powers on Saturday to head off the risk of trouble at another anti-coronavirus rule demo.

Police carried out checks on demonstrators and found several planned to attend the demo with bags of rocks, Den Oudsten said. These were hard core football supporters from various clubs out for a fight with the police, he said.

The main demonstration planned for Utrecht was banned earlier last week, but a number of protestors still gathered at the Oog in Al park in Utrecht on Saturday afternoon.

In the end, police arrested some 15 people who refused to go home.

In Wageningen, police arrested a number of people following clashes between demonstrators and riot police at a second anti-lockdown demo on Saturday.

According to the AD, a group of football hooligans who had been banned from attending the protest in Utrecht then headed for Wageningen to demonstrate there.