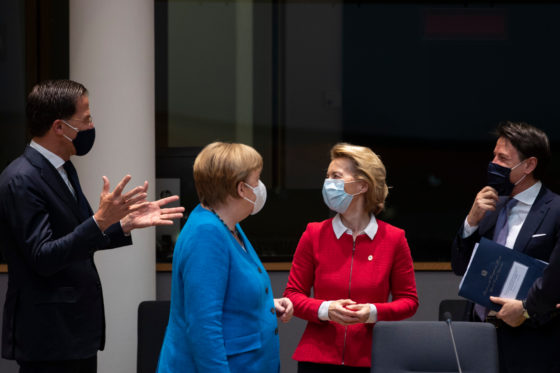 Mark Rutte has described the European Union’s budget deal, including €750 billion of coronavirus relief measures, as a ‘comprehensive and good package that protects Dutch interests’.

The €1.1 trillion agreement was finalised in the early hours of Tuesday morning following four days of talks and heated debate between the leaders of the 27 EU member states.

As leader of the group of so-called ‘frugal’ countries, Rutte had come under fire during the summit in Brussels for opposing no-strings relief for the countries worst hit by the Covid-19 outbreak, such as Italy and Spain.

He acknowledged that tempers had run high during the talks, but insisted that the basis of mutual trust was intact. French president Emmanuel Macron was reported to have slammed his fist on the table during dinner on Sunday and told Rutte he was behaving like former British prime minister David Cameron with his blocking tactics.

‘We can have strong differences of opinion about the substance,’ Rutte told NOS. ‘You might occasionally even see someone bang their fist on the table or lose their rag, maybe from tiredness. But the personal relationships are very good and will continue to be good.’

The EU made concessions to the Dutch position by cutting the amount of subsidies for coronavirus recovery from €500 billion to €390 billion, with another €360 billion available as loans.

The grants are explicitly tied to economic reforms in the countries receiving them, with a so-called ‘handbrake’ built in that all EU nations can apply to freeze the funding if a country is not making progress with its reforms. The emergency brake was one of Rutte’s demands, which he argued would ‘ensure strong member states and a strong internal market.’

The Netherlands’ annual rebate on the EU budget is also being increased from €1.5 million to €1.92 million.

Rutte’s partners in The Hague backed the deal but criticised the prime minister’s handling of the negotiations. Rob Jetten, leader of the pro-European D66 party, said the it had been a ‘bumpy road with a lot of harsh words, caricatures and horse trading between member states.’

Opposition parties were more openly critical, with Geert Wilders, leader of the far-right PVV, describing the deal as a ‘terrible result’ for the Netherlands. ‘Rutte has been brought to his knees,’ he said.

The deal ties EU funding to European standards of democracy and justice, so that countries face having their funding cut if they fail to uphold the rule of law. The Netherlands was one of several member states to call for tighter controls in order to put pressure on countries such as Poland and Hungary not to compromise the independence of the judiciary or freedom of the press.

European Council president Charles Michel said the agreement was ‘a good deal, a strong deal and the best deal for Europe. Italian prime minister Giuseppe Conte, who accused Rutte of ‘blackmail’ earlier in the summit, said he was ‘satisfied’ with the outcome. ‘We have maintained our autonomy and our dignity.’

However, German chancellor Angela Merkel warned of ‘very difficult discussions’ ahead as the budget still needs to be passed by the European parliament, many of whose demands were written out of the deal.