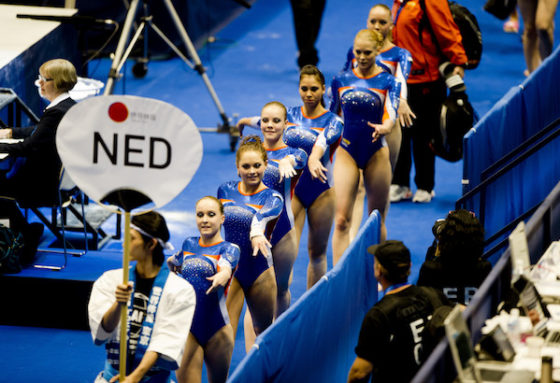 The Dutch gymnastics team in Tokyo in 2011, including Joy Goedkoop. Photo: Robin Utrecht via ANP

A second Dutch coach has been implicated in a widening scandal about the physical abuse of young gymnasts, following revelations made by local paper Noord Hollands Dagblad last week.

Former gymnast Joy Goedkoop has now come forward to say she was physically abused by her coach Vincent Wevers from the age of seven to 12 during training sessions. ‘It did not happen every day,’ Goedkoop told television programme Studio Sport. ‘But being made to feel small, anger and being ignored were daily occurrences,’ she said.

Last week the NHD published a major report on physical and mental abuse in the world of gymnastics, based on conversations with 10 athletes aged between 18 and 41, several of whom took part in international competitions.

They spoke about being dragged across the floor, screamed at and forced to climb ropes with bleeding hands in order to win medals.

The paper also published an interview with coach Gerrit Beltman who admitted he had physically abused and belittled young gymnasts during his career and that he was not the only one to behave in this way.

‘My behavior cannot be justified in any way,’ Beltman told the paper. ‘I wanted to win, whatever it cost… and I am now deeply sorry. It was never my intention to deliberately hit, swear or belittle. But it did happen. I thought it the only way to develop a top sport mentality. I blame myself for getting it wrong.’

Beltman also said that the Dutch gymnastics association KNGU was aware of what was going on but had failed to take action.

The KNGU said in a statement on Sunday that it had been urging athletes to report abuse for some time. ‘We can only get to the bottom of what has happened through concrete reports,’ the KNGU said. ‘Every report will be followed up and investigated in depth, and that includes the claims made by Joy Goedkoop.’

Wevers is currently the trainer of gymnast twins Sanne and Lieke Wevers. Sanne Wevers won Olympic gold on the beam in 2016, the year in which her father was named sports coach of the year.

Meanwhile, two other former gymnasts, Stasja Köhler and Simone Heitinga, who published a book about their experiences in 2013, have told the NRC that Beltman’s admission is too little and too late.

Beltman has also worked in Belgium, Canada and Singapore.