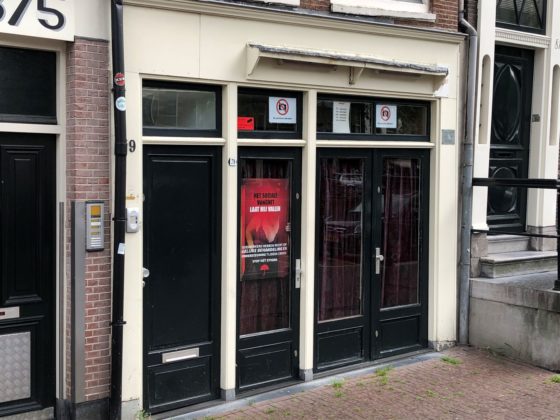 A poster protesting that sex workers ‘fell through the net’ Photo: S. Boztas

For the first time in months, the red curtains in Amsterdam’s Red Light District are open, and scantily-clad women inside them are once again looking out for clients.

From July 1, sex workers are officially allowed to return to work after months of campaigning, protests and proposing their own corona hygiene protocol. Amsterdam’s Red Light District – which was completely deserted at the height of the corona shutdown – is coming back to life, and according to some reports, the women who are back to work have a steady stream of clients.

A spokeswoman for the Prostitution Information Centre in De Wallen, told DutchNews.nl that there was a feeling of celebration. ‘We are all really happy today,’ she said. ‘A foreign man came in earlier and said: “Congratulations! Thank you!” A colleague took her dog through the red light district for a walk, and although not all of the windows were occupied the ones that were, were nice and busy.’

It has been a tough time for the sector, which has repeatedly protested that many prostitutes have fallen through the net of corona support measures, even if they pay all their taxes.

‘The reopening couldn’t come soon enough,’ André van Dorst, director of the brothel owners’ association VER told DutchNews.nl. ‘Most of the help packages passed the sex workers by because of administrative issues, and they were really left high and dry. We have been the most neglected sector.’

Van Dorst said that some brothels opened at 12am on July 1 but others would open later in the day, so it wasn’t clear how busy they would be yet. But he stressed that the sector was keen to get back to work, safely, to try to make up some of the past months’ losses.

‘We think that they can get back to work in a safe way, without excessive risk,’ he said. ‘It’s a one-on-one job, different from going to the hairdresser and completely different from doing your shopping in Jumbo. But it is easy to have rules to minimise the risk of infection, and we’ve been working for some time with strict hygiene protocols.’

The Prostitution Information Centre pointed out that sex workers already take care to avoid sexually transmitted diseases, and said they will be taking extra precautions. ‘You keep the contact short, wash first, and when you are close avoid each other’s breath zone,’ said the spokeswoman. ‘Then the room will be cleaned well…including the door handle.’

Although city councils such as Amsterdam, Utrecht and Deventer wanted to introduce extra measures to support sex workers, and appeals were made in the Dutch parliament too, for some, the corona crisis was devastating.

The Prostitution Information Centre – which advocates for sex worker rights – said that there were bittersweet feelings about the reopening. ‘Last week we were laying flowers for a colleague who had committed suicide after three months with no money,’ said the spokeswoman. ‘Two hours later we heard we could reopen. It’s a tragedy that we didn’t know this a few days earlier – we didn’t see it coming.’

Mark Rutte’s announcement that sex work could officially begin again came as a surprise to many in his last corona press conference last week. He told reporters that no positions were banned, and that sex workers simply had to ask clients – like hairdressers or masseurs – if they had any symptoms that could indicate the coronavirus.

The decision was based on the final report of the Outbreak Management Team, which took a practical view. It said that although ‘the risk of transmission in this sector cannot fully be removed….a ban probably does not mean that no use is made of the services and risks can probably better be limited when sex workers are allowed to work in a normal way.’

The overriding feeling now, according to the Prostitution Information Centre, is one of relief: ‘Yesterday, another colleague was put out of her house, a lot of people have eaten up their spare pot of cash and some survived on food packages. The wolf was really at the door.’