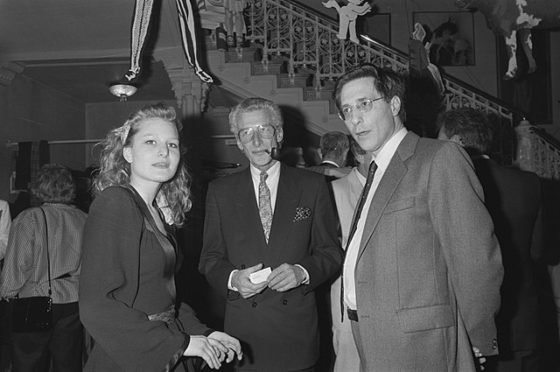 Harry Mulisch and his daughter in talks with Maarten Biesheuvel (right) at the 1988 Book Ball. Photo: Croes, Rob C. / Anefo via Wikimedia Commons

Short story writer Maarten Biesheuvel has died aged 81 after a short illness at his home in Leiden, Dutch media report.

Biesheuvel’s debut In de bovenkooi (1972) earned him critical praise and he went on to write some 200 more short stories. His most recent work, Een Schiedamse jongen, was published last year on the occasion of his 80th birthday. In 2015 a short story competition was named after him.

Biesheuvel suffered from bipolar disorder for most of his life and many of his stories feature his frequent episodes in ‘the madhouse’. His wife Eva, who died in 2018, often appeared in his work as well. Biesheuvel described her as ‘his angel’ who kept him on an even keel as much as possible.

Eventually the disease that inspired much of his work became a barrier and new stories became rare, but to his many fans, welcome occasions.

In 2007 Biesheuvel was awarded the prestigious P.C. Hooft prize for his work.

His short story Brommer op Zee ( Biker at Sea) was translated into English and included in The Dedalus Book of Dutch Fantasy (1993).