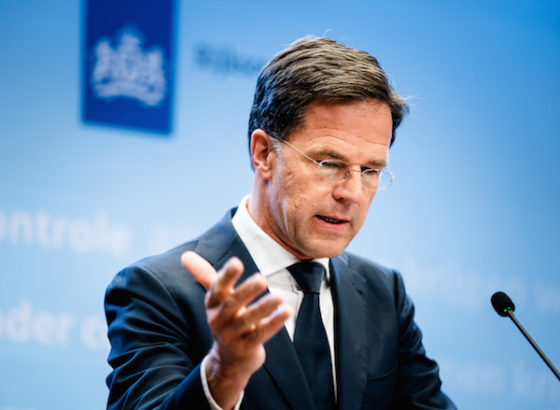 Visitors from the UK and Sweden will not be welcome in the Netherlands when tourism starts up again on June 15, prime minister Mark Rutte told reporters on Wednesday evening.

In addition, the UK and Sweden remain on the Dutch ‘banned list’ of destinations for visitors from the Netherlands because of the risk of contracting coronavirus, Rutte said.

‘The message is, we do not want British people and Swedes here at the moment,’ he said. ‘If they do come, they will have to go into quarantine for two weeks.’

From June 15, people from the Netherlands will be able to visit 12 countries, including Germany, Belgium, Italy, Croatia and the Dutch Caribbean islands. ‘The health risks have to be the same as they are here,’ Rutte said.

Later, other European countries such as Spain and France will be added to list of countries, if they formally lift restrictions on tourists from the Netherlands, Rutte said, adding that ‘we are taking this step by step.’

Countries which have imposed quarantine on people from the Netherlands – such as Denmark – will also remain on the orange list where travel should be avoided, he said.  But Danish tourists will be admitted to the Netherlands. ‘We are not doing this on the basis of tit for tat,’ Rutte told reporters.

However, travel outside the EU will still be on the basis of essential journeys only and everyone who does so will have to go into quarantine for two weeks on their return. ‘And we will not be repatriating [people who get stuck],’ Rutte said.

The public health institute will look at making changes to the official recommendations on a weekly basis.

Asked if it was sensible to book a holiday, Rutte said it is up to individuals about whether or not they want to take the risk. ‘I don’t think anyone is waiting to get holiday tips from me,’ he said. ‘We are asking people to show responsibility and to remain alert. But we are not banning anything.’

However, the prime minister stressed that people should follow the rules of the country they visit, as well as sticking to the Dutch ones, and urged people who can avoid the high season to do so.

‘The Netherlands has chosen to give a lot of responsibility to people themselves,’ Rutte said. ‘We have not had the police knocking on the door and we have handed out far fewer fines for breaking the 1.5 metre rule than other countries. So I really have confidence that they will continue to do this.’