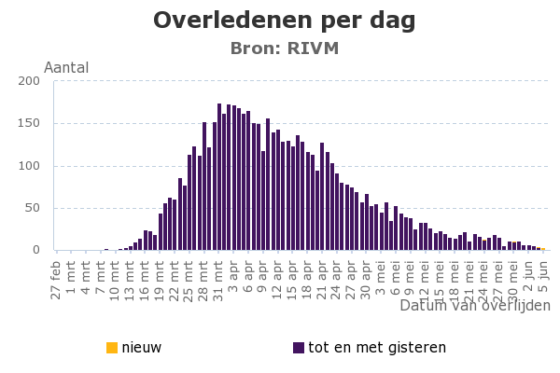 Newly reported deaths per day, with those made in the past 24 hours in orange

The official coronavirus death toll in the Netherlands rose by six to 6,011 on Saturday, the public health institute RIVM said in its latest update. A further three people have been hospitalised with the virus and 183 people have tested positive.

In total, 47,335 people in the Netherlands have been confirmed to have the virus. The number of daily positive tests has gone up considerably since June 1, when everyone with symptoms was given the green light to be checked out.

By Friday the government hotline set up to deal with test requests had been phoned 500,000 times, and some 10,000 tests a day had been made.

‘We expect to have carried out 80,000 tests by Sunday,’ Sjaak de Gouw, of the national GGD health board told broadcaster NOS on Friday.

Testing capacity is currently 30,000 tests a day and it is unclear why that total has not yet been reached.

Problems with the phone line are likely to be one reason. On Monday, the first day the request line was open, 300 of the 1,100 telephonists were unable to log into the system from home, NOS said. In addition, phone calls were lasting an average of eight rather than the five minutes which had been estimated.

Some of the phone operators gave up and 300 new ones had to be trained up to do the job. The problems have since been solved and the system should be operating fully from this weekend, De Gouw said.

Meanwhile, figures published by the RIVM show that almost half the 6,000 people who have officially died of coronavirus lived in a nursing home. In total, 2,750 nursing home residents died from Covid-19 after being tested for the virus, with a peak on March 31.

However, the under-reporting from nursing homes is likely to be considerable, health minister Hugo de Jonge told MPs earlier this week. Until April 6, only one or two patients per unit were tested for the virus and many cases were unregistered.

Visits to nursing homes are now being eased and residents may have more than one visitor.

Nine in 10 of the official Dutch coronavirus deaths involve people over the age of 70 and 70% of them had underlying health issues, the RIVM figures show. Men account for 55% of the deaths.