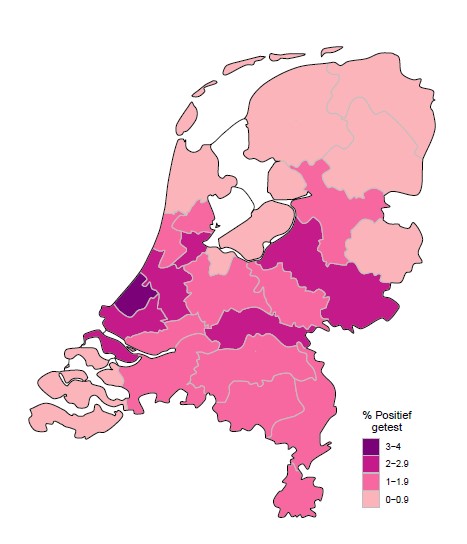 Local health boards in the Netherlands have carried out 112,800 tests since the coronavirus testing programme was opened up to everyone on June 1.

So far 103,400 tests have been completed and 1.7% were positive, the public health institute RIVM said on Tuesday.

At the same time, there are wide regional variations in the infection rate. The positive result in the region around The Hague varied between 3% and 4%, while in the northern provinces the percentage varied from zero to 0.9%.

The northern provinces, where Carnaval is not celebrated and where the winter school holidays were earlier, have been far less seriously affected by Covid-19 than the south.

However, willingness to be tested may also play a role in the variations, the RIVM said.

The infection rate is also highest among people who have been tested because they were in contact with someone who was later diagnosed with coronavirus. Of the 1,700 tests carried out on people who were identified via the tracing system, 16% were positive, the RIVM said.

However, just 0.5% of the 2,500 children under the age of 11 tested in the past two weeks have proved to be positive. Among teenagers, the positive infection rate was 1.8%.

The RIVM said on Tuesday that the number of people admitted to hospital with coronavirus has risen by four to 11,834 overnight, while five more people have died. That takes the official death toll to 6,070, although experts suggest it could be up to 30% higher.

Over the past two weeks, 65 people have died of coronavirus and 34 people have been admitted to hospital, the RIVM said.

This is roughly one third of the deaths and hospital admissions recorded in the two weeks to June 2.

The number of positive tests was also down slightly, which is notable given mass testing started on June 1, the RIVM said.