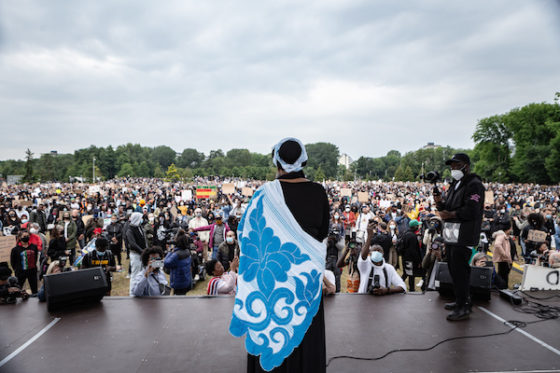 Co-organiser Gideon Everduim said the protest had ‘written history’. ‘Etch this into your memories,’ he said during a speech. ‘We will dub today Anton de Kom day’, he said, referring to the Surinamese anti-colonial campaigner and writer. ‘So we will be back here again next year.’

The demonstration was the latest in a string of rallies across the Netherlands which have been inspired by the death of George Floyd at the hands of police officers in the US.

The first demo, in the centre of Amsterdam, was attended by 5,000 people. Amsterdam mayor Femke Halsema was widely criticised for allowing that demonstration to go ahead, even though social distancing was impossible.

Halsema easily survived a vote of no confidence in her performance at a full meeting of the city council on Wednesday night, with just the VVD, far right FvD and pensioners party voting for the motion.

During the debate, she admitted that there had been a major error in the estimate of how many people would attend. And, she said, she deeply regretted the fact that the demonstration itself ‘which meant so much to so many people’ had been overshadowed by this mistake.