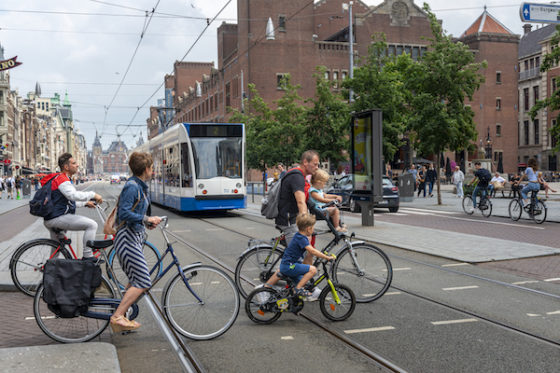 Making helmets compulsory for children and people using electric bikes would save dozens of lives a year, two government think-tanks say in a new report on strategies to solve traffic problems.

The report, drawn up by the CPB and environmental assessment agency PBL, looks at measures which ministers can take in the run up to 2030 and is designed to stimulate debate ahead of the 2021 general election.

The main conclusion of the report is that investment to improve the cycling infrastructure in the bigger Dutch cities is of crucial importance because the bike is second only to the car in popularity as a mode of transport.

Helmets for children up to the age of 12 and for electric bike users would also help improve the safety of cyclists, the reports’ authors say.

The cost of making helmets compulsory for some cyclists are ‘relatively limited’ when compared to the potential reduction in victims, the agencies say. In total, thousands of people would avoid serious injury and 45 deaths would be averted – around 7% of the number of traffic accident fatalities a year.

The Dutch cycling union Fietsersbond is a fervent opponent of compulsory helmets. ‘It is a bad idea,’ policy advisor Wim Bot told the AD. ‘Just promoting the idea that helmets should be worn strengthens the idea that cycling is not a safe activity in itself.’

The impact of helmets on traffic deaths in other countries cannot be easily transferred to ‘cycling cities’ such as Amsterdam, Bot said.

The Dutch road safety research foundation SWOV does not have an official standpoint on helmets either. ‘There is little support for helmets in general,’ the organisation told the AD.

‘The most important reason [not to make them compulsory] is that the popularity of cycling may decline.  Some foreign studies have shown this to be the case, although most studies show no, or only a temporary, impact.’

A report by the SWOV last year said that if cyclists in the Netherlands always wore a helmet, there would be 85 fewer road deaths a year. The report was based on an analysis of international studies.

The CPB and PBL report also recommended the introduction of road pricing at rush hour. A variable charge of five to 15 cents per kilometre at busy periods would keep 25% of traffic off the road, the agencies calculate.