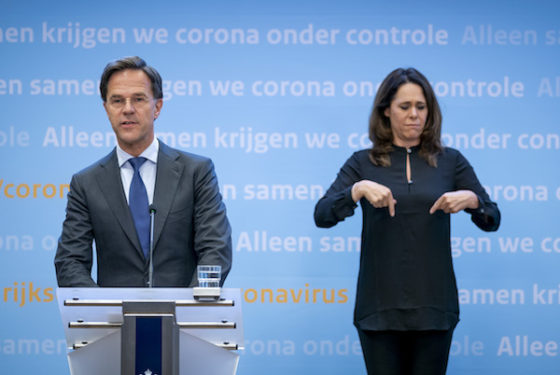 The Netherlands will take a major step towards returning to ‘normal’ on July 1, with new rules for cafes, cinemas and events – and major changes to the situation on public transport.

In addition, football stadiums will reopen to fans, as long as social distancing rules apply, and sex workers will be able to start working again.

Outlining the changes, some of which had been leaked in advance, prime minister Mark Rutte said that the most important statistics about the coronavirus show it is stable and low, or still declining.

‘The positive news is that we can do more than we had expected [from July 1],’ Rutte said. ‘By keeping our distance from each other, we have given ourselves more room.’ All research, he said, shows that 1.5 metres is crucial.

The rules – washing your hands, working from home and keeping your distance – remain paramount, as does staying at home if you have symptoms, Rutte said. But it will require more self discipline to keep to the new rules, the prime minister said.

Asked about the determination to keep the social distancing rules, despite growing opposition, Rutte said sticking to 1.5 metres is crucial. ‘I am not going to beg people to do it,’ he said. ‘But I do think we are responsible enough, and adult enough to do this.’

The main changes from July 1:

Rutte said that the long list of new measures shows that the end of the road map has been reached earlier than expected – July 1 instead of September 1. ‘But we must continue to keep a close eye on developments,’ he said. ‘We will have more freedom than we expected.’

Health minister Hugo de Jonge said that the Netherlands must continue to do everything it can to keep a second wave at bay. ‘We can be done with the virus but the virus is not done with us,’ he said.

‘We should liken this to our centuries-old battle against the sea,’ he said. ‘We are only really protected if there is a vaccine.’

De Jonge also urged everyone who has symptoms to come forward for testing. One in 10 people who are identified via the track and trace system are found to have coronavirus, he said.

The app which is currently being worked on will be ready for testing in a couple of weeks and then it will be decided about how it should be implemented, he said.

The government will next review the rules ahead of September 1.