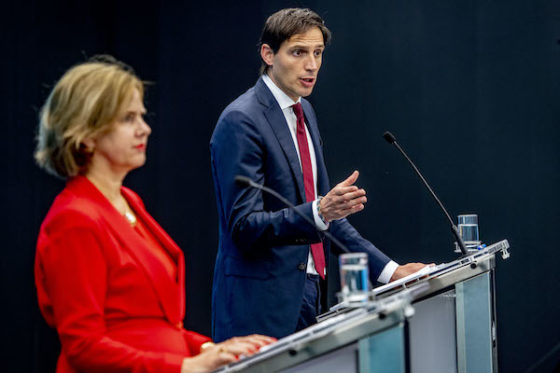 Ministers and KLM have reached agreement on a €3.4bm package up to 2025 to help the Dutch flag carrier through the coronavirus crisis, finance minister Wopke Hoekstra confirmed on Friday.

The financial support is made up of a €1bn loan and €2.4bn in guarantees for commercial loans, which KLM has already agreed with banks.

The impact of coronavirus on the aviation sector is much more serious than had been originally thought and more support cannot be ruled out, Hoekstra said.

A KLM collapse would have a major impact on the role of Schiphol ,and jobs in all sorts of sectors, as well as on companies deciding to base their operations in the Netherlands, he said. ‘Therefore it would damage our open and export-driven economy,’ Hoekstra said.

The cabinet said on April 24 that it would come up with a package worth up to €4bn to bail out KLM which has seen passenger numbers plummet to virtually zero as countries around the world went into lockdown or closed their borders.

The package is not without conditions. The cabinet has agreed that parent company Air France-KLM and both subsidiaries should cut costs – by 15% in KLM’s case.

Staff earning three times average salaries will be asked to take a 20% pay cut while those on lower incomes will also be asked to accept lower pay. No dividends or bonuses will be paid until the loans are repaid and the number of night flights will be cut from 32,000 to 25,000.

KLM must also make an ‘active contribution’ by agreeing to cut CO2 emissions per passenger kilometer by 50% in 2030, when compared with 2005.

The cabinet has appointed a ‘state agent’ to make sure that the terms of the deal are complied with and that the money is properly spent.

The Dutch and French states both have a 14% stake in the Air France-KLM partnership.

Not everybody is happy with the bail out. Environmental organisations including Greenpeace and Friends of the Earth said in a joint response that they had hoped any state support would be used to get the airlines ‘on the right path’ towards reducing damaging gas emissions and pollution.