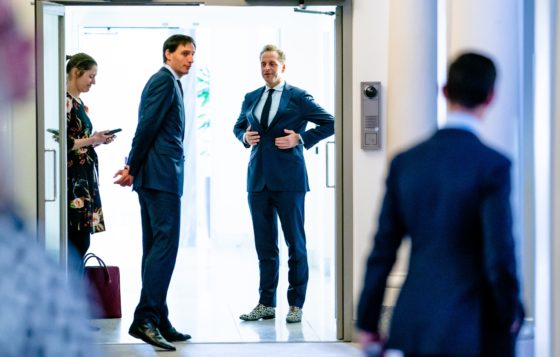 The Christian Democrat leadership contest has begun in earnest after the party set a deadline of June 24 for candidates to put their name forward.

Finance minister Wopke Hoekstra and health minister Hugo de Jonge have been considered the front runners for the job since Sybrand Buma resigned to become mayor of Leeuwarden last May.

Interim leader Pieter Heerma made clear from the outset that he would not head the CDA’s list of candidates in the election, which is scheduled for next March.

Party chairman Rutger Ploum said the party wanted to have a new leader in place before the summer recess so they had time to prepare for the new political year.

‘The potential candidates have been very busy in the last few months with tackling the coronavirus crisis and its consequences,’ said Ploum. ‘And we’re expecting to have an intense autumn. That’s when the campaign will begin.’

The CDA’s governing board will select one or more suitable candidates by the end of June and invite challengers to come forward. If more than one candidate is named party members will vote in a leadership contest at the start of July.

The CDA finished third in the 2017 election with 19 seats, just ahead of D66. Both parties are in the current coalition along with the right-wing liberal VVD and the smaller ChristenUnie.

Last week Labour (PvdA) confirmed that Lodewijk Asscher would continue as leader until the election. Later in the summer the VVD is expected to confirm whether prime minister Mark Rutte will head its list of candidates.