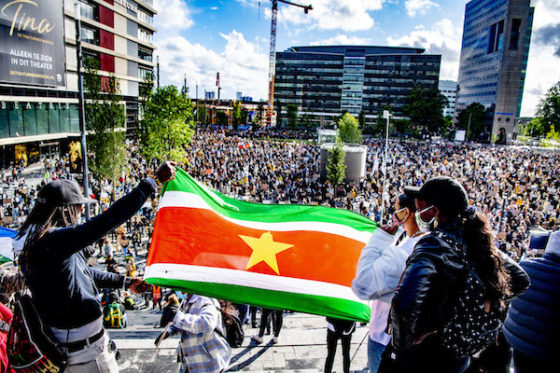 Thousands of demonstrators took part in anti-racism rallies in the rain in Utrecht, Nijmegen and Enschede on Friday and more gatherings are planned for the next few days.

In Utrecht some 3,500 people assembled at the Jaarbeurs square near the main railway station, but officials used social media at around 7pm to urge people to stop coming because the space was too full.

In Nijmegen, demonstrators gathered in the Goffert park, where tape had been stretched out to show people where to stand at the proper distance from each other. Some 750 people had been expected to attend, but police photos put the number at around 1,000.

In Enschede, around 500 people took part in the demonstration on the Van Heekplein – the maximum agreed between organisers and the local authorities.

‘I was positively surprised at how many people took part,’ campaigner Mitchell Esajas told NPO radio. Esajas, who helped organise the earlier protests in Rotterdam and Amsterdam.

Esajas described the current situation in the Netherlands as ‘a turning point’. In particular prime minister Mark Rutte’s admission that things have to change is ‘a step in the right direction’, he said.

While agreeing with the prime minister that everyone has to work together to combat racism, Esajas said that campaign groups hope the government will play a leading role and develop new policy together with community groups.

More demonstrations are due to be held in Tilburg and Eindhoven on Saturday evening. And on Wednesday Amsterdam’s Bijlmer district south east of the city will  host the second rally in the capital. Many of the city’s Afro-Caribbean residents live in the Bijlmer.