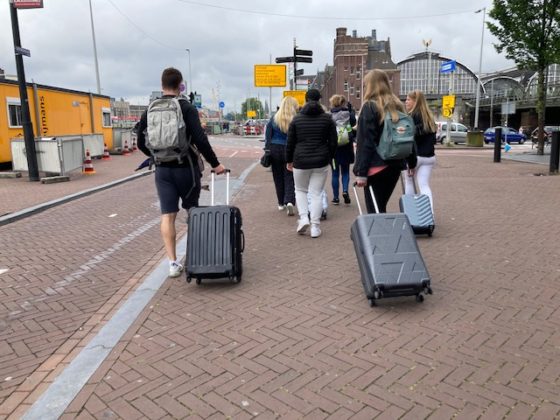 A petition calling on Amsterdam city council to put a limit on the number of tourists coming to the city had been signed over 18,000 times by Tuesday morning, and is well on the way to reaching the number necessary to force a referendum on the issue.

‘If the number of tourists rises to the pre-coronavirus crisis level, then the economy and streets will once again be dominated by tourists,’ Martijn Badir, one of the people behind the petition, told the Parool.

In Amsterdam, the lockdown has highlighted how dependent the oldest part of the city has become on tourism – with deserted streets and closed shops – and hundreds of empty properties.

The petition calls on the city to put a 12 million limit on tourist stays for the next five years, a ban on the development of new hotels and a ban, or partial ban, on holiday rentals. It also wants to see a sharp rise in tourist taxes.

In addition, the organisers say, the city should also have an alderman with special responsibility for tourism and quality of life. According to the city’s own figures, in 2018, tourists spent 16.6 million nights in Amsterdam in 2018.

If the petition attracts 27,000 signatures, that will be enough to force the city council to organise a referendum on the issue.

Meanwhile, tourists are slowly returning to the Netherlands, and the government has said people from most European countries are now welcome, with the exception of Britain and Sweden.

However, foreign tourists must have booked accommodation in advance and follow local rules on social distancing.

Visitors from outside the EU are not yet welcome, and the Netherlands has imposed an entry ban for all but essential travel up to July 1, at least.