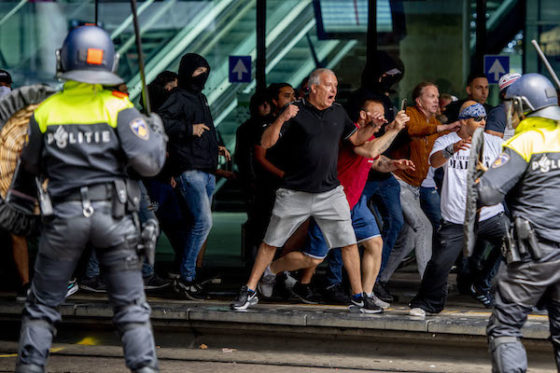 Some 400 people were arrested in The Hague on Sunday in a day of protests against the coronavirus measures, police said on Sunday evening.

The arrests were mainly made after police moved in to clear demonstrators from the Malieveld near the city’s main railway station.

The rally had been banned by acting mayor Johan Remkes last week, a decision that was upheld in court on Friday. Nevertheless, despite the ban, hundreds of people gathered at the Malieveld early on Sunday afternoon.

Remkes did then agree to allow a smaller rally to go ahead, on the condition it was over by 13.30 and that demonstrators kept their distance from each other.

The atmosphere, which had been largely positive, turned when groups of men, some chanting ‘we are Nederland’ first joined the demonstration and then later headed into the town centre, which had been sealed off by police.

Police brought in water cannon and horses to clear the crowds, telling one couple with a young child ‘you had better leave, not everyone is here with good intentions’, the Volkskrant reported.

Remkes said on Sunday evening that police were aware that ‘different groups of trouble makers, including football supporters’ were planning to join the demonstrators in The Hague, which is one reason why the original protest had been banned.

‘This was nothing to do with the right to demonstrate or freedom of speech,’ Remkes said in a statement. ‘This group was out to cause trouble.’

Most of those who were picked up police, including passersby who had not been at the demo, were allowed home on Sunday evening.