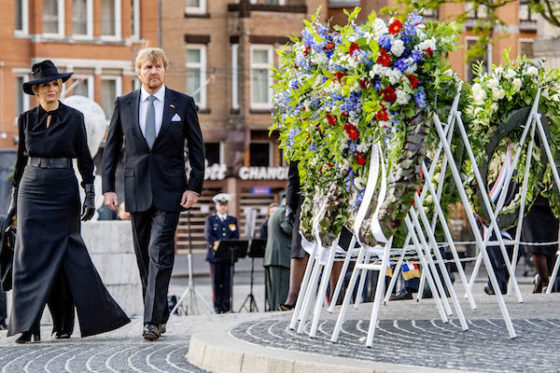 The king and queen walk past the wreaths on an empty Dam. Photo: Robin Utrecht ANP

The Netherlands remembered its war dead on Monday in a series of pared down ceremonies nationwide, as cornavirus put paid to the customary large gatherings.

In Amsterdam, where thousands of people usually flock to Dam square for the main event with the king, a handful of people took part in a simple wreath laying ceremony.

King Willem Alexander and queen Maxima laid their wreath in the presence of prime minister Mark Rutte and Amsterdam mayor Femke Halsema, ahead of the traditional two minutes’ silence.

In a break with tradition, the king gave a short speech to the nation, during which he said there has been nothing like the current situation since World War II. ‘But now, we are making a choice in the interests of life and good health,’ the king said. ‘Then the choice was made for us, by an occupier with a merciless ideology, who drove millions of people to their deaths.’

The king spoke about Jules Schelvis, a 93-year-old survivor of the Sobibor extermination camp who gave a reading at the Remembrance Day ceremony six years ago.

‘He spoke about the hunger, the exhaustion and the filth,’ the king said. ‘He asked what normal person could have come up with this… And he spoke about being taken to Muiderpoort station with hundreds of others, while hundreds more looked on, without protest.’

‘It happened so gradually,’ the king said. ‘Each time a step further. Not being allowed to go to the swimming pool, not being allowed to play in an orchestra… Sobibor began in the Vondelpark, with a sign that said “forbidden for Jews”.

The king spoke about the Resistance, the young soldiers and the soldiers who did not return from peacekeeping missions in later years.

‘War works its way through generations,’ he said. ‘Now, 75 years after our liberation, war is still in us. The least that we can do is not to look away, not to justify, not to erase, not to set apart. Not to normalise something which is not normal.’

A free, democratic state must be cherished, the king said. ‘Because that is only thing that protects us against arbitrariness and madness.’