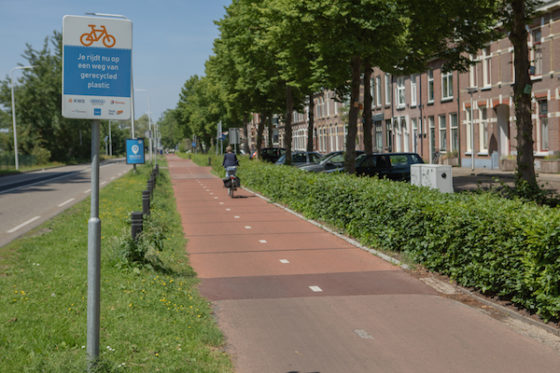 Two successful trial runs of cycle paths made from recycled plastic waste have paved the way for larger scale projects in the Netherlands and abroad, the developers have said.

KWS, plastic pipe maker Wavin and Total oil said on Thursday that after a 18 months of testing and developing, they now have a design suited for industrial production and that the technology is ready to be launched on the market in the first quarter of 2021.

The first plastic cycle paths, which were built in Zwolle and Giethoorn with local council support, have proved to be able manage excessive water from rain, severe drought and everything in between, the makers said.

The two 30 metre bike paths, which were made using 1,000 kilos of recycled plastic, were also found to have reduced CO2 emissions by some 50% to 70% compared to concrete or asphalt paths, the makers claim.

Sensors in the paths were also used to monitor wear and tear and the paths were found to stand up well to heavy weights, like refuse and maintenance trucks.

‘We have proven that our ground-breaking circular concept – a prefab road based on recycled plastic – is feasible in practice,’ Marcel Jager and Anne Koudstaal of the PlasticRoad team said.

The next generation of roads will be more robust still which will make the concept a viable alternative for asphalt and concrete motorways and car parks as well pavements and school yards, the group said.

The roll out will initially be focused on clients in the Netherlands and neighbouring countries, after which they expect to scale up to markets in other parts of the world, the makers said.