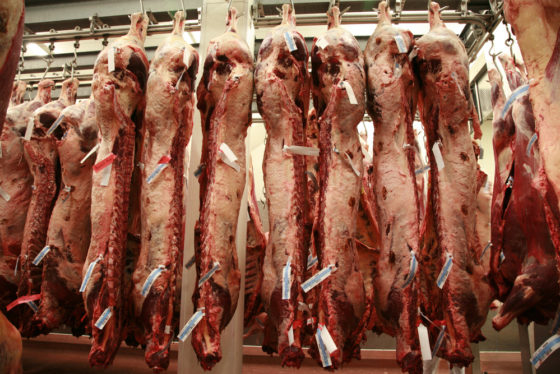 In total, 147 out of 657 workers at an abattoir in Groenlo have tested positive for coronavirus, the local health board has said. The plant, owned by meat giant Vion, was closed on Wednesday after 45 workers initially tested positive.

The case is the second to hit a Dutch meat factory. Earlier this month, dozens of largely Romanian workers from a Vion meat processing plant in Scherpenzeel were placed in quarantine on a boat after becoming ill.

Some 30 workers at the Groenlo slaughterhouse have not yet been tested, either because they failed to turn up at the test site or because they have not been contacted. Local health officials have now given Vion 48 hours to find the missing workers so they can be tested and their contacts traced.

In addition, the company and the staffing agencies supplying the workers have been told to organise ‘humane’ accommodation which allows those with the virus to quarantine properly.

According to the FNV trade union, 75% of the workers are on staffing agency contracts and come from Poland and Romania. Many – 79 – live over the border in Germany.

Local health board chief Ton Heerts has described the number of infections as ‘very worrying’ and has warned other slaughterhouses in the region they too can expect spot checks.

Chief executive Ronald Lotgerink told the AD none of the workers who have tested positive reported symptoms. ‘This would appear to be a distinguishing mark of the virus,’ he said. ‘We don’t know why our Groenlo plant has become a centre for infection and we do keep strictly to the rules.’

Nevertheless, the company would now look again at workers’ ‘living quarters, working environment and transport to the location,’ he told the paper.

Some 80% of workers at Dutch slaughterhouses are classed as ‘labour migrants’ employed through agencies and who often share accommodation, including bedrooms. The work itself is labour intensive and workers are ferried to the factory in buses and vans.

The meat industry in the US and Germany has also proved highly susceptible to coronavirus. The closed, and cold environment, is thought to be one reason why.

Meanwhile, the Dutch food safety board NVWA says there is no danger that the virus can be transmitted via meat, because it needs a living organism to survive.