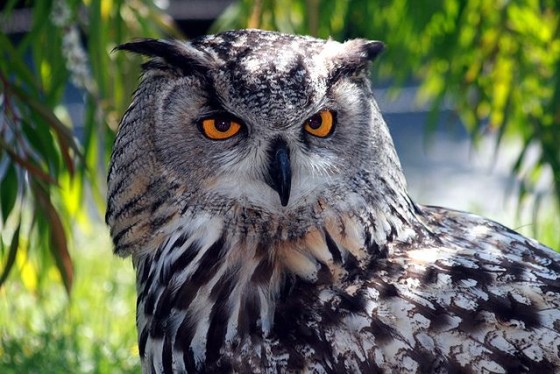 The planter outside the window of Dutchman Jos Baart which has become the home of three eagle owl chicks and their mother is turning into a social media sensation as thousands of people tweet their enthusiasm for both the man and the birds.

In an interview with nature programme Vroege Vogels Baart said he loved having an unimpeded view of the birds as they peer back at him through the third storey window of his flat in the city centre of Geel in Belgium.

Eagle owls, one of the largest owl species in the world, are shy and don’t normally show themselves. However, it’s not the first time Baart has had a visit from this particular owl, he told Vroege Vogels, but the two eggs deposited in his planter at that time did not hatch.

In February he discovered another three eggs which came out around Easter. The chicks are now five weeks old and peer over Baart’s shoulder as he watches television. ‘They are attracted to the light and the movement,’ he said.

Baart said the mother owl is shy often seeks refuge in the clock tower of the nearby church. ‘She has a good view of the nest from there. She can stay there for six to eight hours at a stretch,’ Baart said.

It is not clear where the eagle owl comes from. The three chicks have been ringed by the Flemish nature organisation Natuurpunt.

Baart has another two months to enjoy the nest. Asked if he would be suffering from ‘empty nest syndrome’ when the chicks fly off Baart said he definitely would. ‘I hope they come back. I wish I had them in front of all my windows. They are a joy,’ he said.