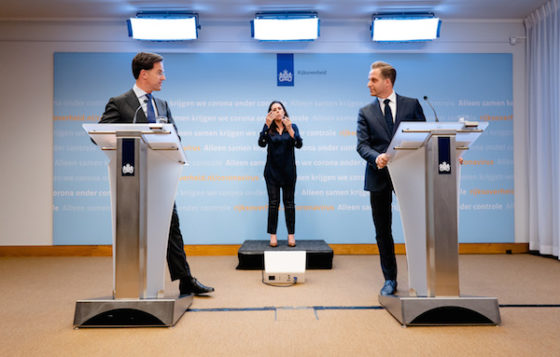 Plans to open up restaurants, cafes and cinemas from June 1 can now go ahead as planned, prime minister Mark Rutte told reporters on Tuesday evening, following a meeting with health experts and other crisis team advisors.

‘Together we have earned this room to ease the rules, and relaxing the measures makes it even more important that we keep to the rules,’ Rutte said.

The cabinet’s strategy, he said, is to look at the bigger picture, not just at an individual sector level. ‘Each step we take means busier streets, more people in public transport,’ he said. ‘If we move too quickly and need a second lockdown, then that will be even worse for our economy.’

From June 1 all secondary schools can open again, as long as the 1.5 metre rule is observed. Pupils should walk or cycle to school, and special transport will be organised for those who live too far away.

Public transport remains reserved for people in essential professions and non-medical face masks will be compulsory from June 1, Rutte said. People who don’t comply face a fine of €95.

Cafes and restaurants may have 30 customers indoors, and no limits to terrace numbers as long as everyone is seated at a table and keeps 1.5 metres distance – unless they are members of the same family. Clubs and dance cafes will remain closed.

Rutte said he understood that cafe owners are disappointed at not being allowed to open during Whitsun, when good weather is forecast, but the risk of allowing them to open early is too great.

Museums can also open again from June 1, provided tickets are sold in advance. Visits to nursing homes and other institutional care homes will also be further relaxed from that date. The government is also in talks with gyms and sports schools to see if they can be allowed to open earlier than September 1, as outlined two weeks ago.

From June 8, primary schools can open fully again, as long as the partial opening has not led to a boost in infections, Rutte said. Trade schools will be able to start carrying out tests and practical lessons from June 15.

Health minister Hugo de Jonge said the government’s strategy now is to ensure maximum control of the virus ‘so we can live our lives as we are used to’.

‘We have to realise that this is the situation until there is a vaccine,’ he said.

Plans to introduce mass testing of everyone with symptoms are on target to start up in June, and the aim to begin on June 1 remains in place, De Jonge said. Capacity is at 30,000 tests a day but it depends how many people show up with symptoms.

Coronavirus in the Netherlands: a timeline

People who have symptoms will be able to make an appointment with the local health board for a test. If the test is positive, they will be phoned and told to stay in and officials will then begin tracing contacts who may also be infected, De Jonge said. Officials expect a positive test rate of 2% to 8%.

Officials are also working on a ‘dashboard’ which, De Jonge said, will improve the provision of information and boost insight into the way the virus is being spread. The information, which will be largely public, ‘will signal if we have to intervene locally or regionally,’ De Jonge said.

The prime minister also spoke directly to children, thanking them for doing ‘a great job’ so far. ‘No-one knows how our country is going to look in the future and it is important that you think with us,’ Rutte said. ‘Your ideas and creativity are very important and we urge you to share them with us.’