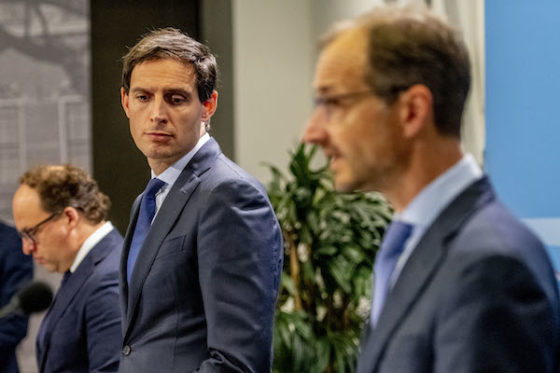 The Dutch cabinet is extending its coronavirus support package for industry by three months, at a cost of a further €13bn, the cabinet announced on Wednesday.

The current measures are due to expire on June 1.

Ahead of the presentation, prime minister Mark Rutte said Wednesday’s new jobless figures are ‘dramatic’ and said the impact of coronavirus on the economy is ‘enormous’. ‘That makes it even more important to support companies and their workers as much as possible,’ he said.

‘The ultimate aim is to protect jobs as much as possible, but at the same time we must help companies and their workforces to adapt to the new reality, and the changes which will continue to be visible in our economy and our society,’ the prime minister said.

During the presentation, ministers said that the economy will not be the same again in the post Covid-19 period, and that bankruptcies and layoffs are inevitable.

‘We have to be realistic,’ social affairs minister Wouter Koolmees said. ‘We have a difficult period ahead of us. That means redundancies and bankruptcies. Some work will not come back.’

Finance minister Wopke Hoekstra said that people had to realise the virus will be around for a longer period. ‘We know that we are in a recession and that the consequences, particularly at a personal level may be far-reaching,’ Hoekstra said.

The finance minister said the government is asking every company, every worker and every freelancer to be adaptable, inventive and willing to take a different direction if necessary.

As expected, the NOW subsidy to help companies pay wages will no longer be considered a subsidy if companies go on to sack staff, but the fine, equivalent to 50% of the support, will now be scrapped.

Companies will be able to ask for help if they have lost at least 20% of their turnover, and the conditions have been eased for firms in seasonal sectors.

Companies which benefit from NOW support may not pay any bonuses to the boards or senior staff or dividends to shareholders. Nor may they embark on share buy-back programmes. In addition, companies applying for NOW support will be encouraged to help staff retrain.

But ministers have not taken steps to exclude companies which pay little or no tax from benefiting from the scheme, as demanded by unions and some political parties.

As leaked earlier, the self-employed who apply for help (TOZO) will now face a check on their partner’s income and will not be eligible for payouts of up to €1,500 if their partners can support them. The aim of this is to guarantee that only freelancers who really need the money can claim it, ministers said.

Companies will also be able to claim compensation of up to €20,000 to help pay fixed costs such as rent. The amount of the compensation under the revamped TOGS scheme will depend on the size of the loss of turnover. Credit schemes for small and medium-sized firms will also continue.

Companies will also be able to delay making tax payments until September 1.

Ministers are also working on plans to help people on flexible contracts who are not covered by any of the other schemes for emergency assistance. Those details will be published later.