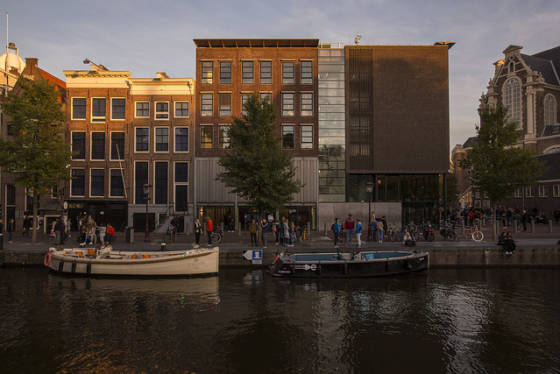 On the 60th anniversary of the day the Anne Frank House opened its doors, the landmark museum has appealed to the public for support in keeping them open.

On 3rd May 1960, the secret annex where young diarist Anne Frank and seven other people lived in hiding during the Holocaust became a museum. Otto Frank, Anne’s father, had raised the 350,000 guilders needed to buy and restore his old office building with the help of the former mayor of Amsterdam and the generosity of Dutch donors.

On 12 June 1958, which would have been Anne’s 29th birthday if she had not been caught and murdered by the Nazis, Amsterdam mayor Gijs Van Hall advertised for contributions in the Volkskrant, saying that the house must be preserved ‘as a symbol of courage, hope, and trust in people in the midst of the deadly threats of our times.’

Sixty years later, the organisation – which has been closed due to the coronavirus – is asking for public support to maintain its educational programme and world-renowned museum.

Ronald Leopold, executive director, said: ‘The world is going through an unprecedented crisis, which has an enormous impact on people everywhere and on the Anne Frank House as well…We are an independent museum that is not subsidised by the state or the city. If we are to continue to spread the memory of Anne Frank and her father’s mission, we desperately need financial support.’

Spokeswoman Annemarie Bekker told DutchNews.nl that the museum has an extensive educational programme, normally runs touring exhibitions throughout the world, and employs more than 100 staff. This is funded largely through ticket sales to some 1.3m million visitors a year.

In 2018, for instance, despite being partially closed for renovations, the museum took €11.2m in entrance fees and around €4.5m from other products, projects and activities. The charitable body made a profit that year of almost €174,000.

But Bekker said that in a new type of economy where we all have to stay 1.5m apart, visitors will be strictly limited. ‘When we can reopen, we don’t know the amount of visitors we can have but we predict it will be 20% of the normal amount,’ she said. ‘Ninety percent of our visitors also come from abroad. We have never actively fund raised before but we are an independent museum and we have to carry our own weight: this is why we are reaching out.’

The Anne Frank House is not yet in dire straits, but already Amsterdam’s Museum of Bags and Purses has closed and the Dutch association for museums has predicted that a quarter of the country’s institutions will shut this year if there is no more governmental support.

‘In recent years they have become more and more dependent on public income, which has now gone completely,’ director Mirjam Moll reportedly told the Parool this weekend. ‘They have very little to live on.’

Museums including the Anne Frank House are expected to remain closed until at least June 1, and it is unclear when international tourists will begin to visit again.