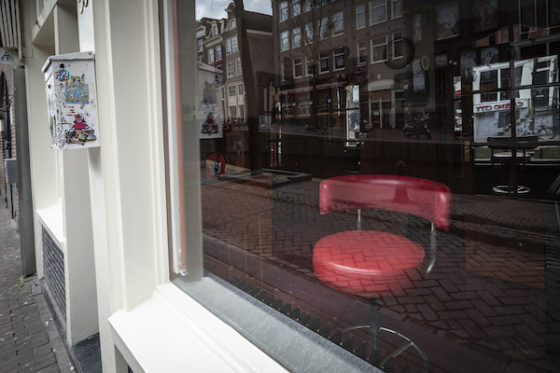 This sex worker may be on a compulsory break. Photo: Dingena Mol via HH

The complete care package – dubbed niksseksen after the Dutch lifestyle niksen trend for doing nothing – means prostitutes would be required to stop working and take a break every four hours, even in the middle of a job.

Amsterdam and other cities have reduced their numbers of window brothels and this, experts say, means that in recent years women have been working extra shifts to meet demand.

Lora Lust of prostitution rights group HorizonTaal believes the new measures have been a long time coming. ‘We speak for sex workers, women who may open their mouths but are rarely listened to,’ she said.

She expects a trial of the new working conditions in the summer, once coronavirus social distancing rules and fines for multi-client trysts are relaxed.

The Dutch government recently conducted research into the abnormal stresses and strains of sex work. ‘The study found that an hour on your back is equivalent to 1.52 hours of upright working,’ social affairs ministry spokeswoman Ann Tenaar said.

‘Sex workers have a right to be compensated for their discomfort through mandatory breaks and relaxation therapy, just like any other person doing hard physical labour.’

Physiotherapist Hans Ohnn, who treats sex-related complaints, has won a European Union grant to devise restorative exercises for the breaks. ‘A walk round the block is also good, but the women should remember to put on a coat and comfortable shoes while on the street,’ he said. 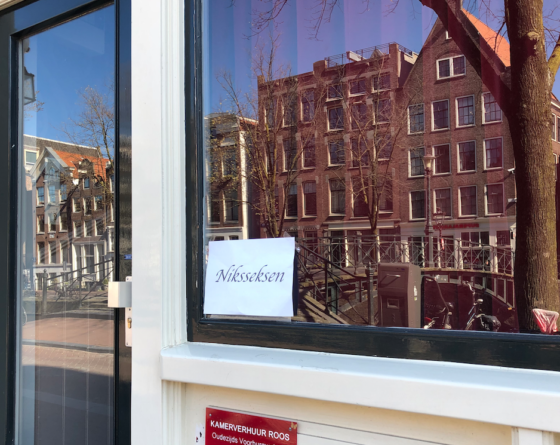 A sign could also indicate the sex worker is having a break. Photo: DutchNews.nl

However, Bas ‘t Aard, chairman of the Dutch brothel owners’ association, said his members should not be picking up the tab for the breaks.

In addition, he said, customers who are halfway through their allotted time should certainly not be offered entertainment and snacks on the bill of the brothel while they wait for their sex worker to finish niksseksen. ‘We owners should not be penalised if some clients can’t keep it up,’ ‘t Aard said.

There are also questions about how the new regulations should be policed. A recent ‘mystery shopper’ scheme for brothels had no shortage of volunteers but was scrapped after undercover officials were exposed.

‘It wasn’t hard to blow the inspectors’ cover,’ said Lust. ‘They turned up in brand new casual gear and when I made them a cup of ginseng tea they asked for the receipt. One even got out his clipboard. It was a big flop.’

But punters are not taking the changes lying down. Gary, a taxi driver from Liverpool who was recently signed off work for stress, says trips to Amsterdam’s red light district help him ‘lighten his load’ .

‘First Brexit had us chucked out of the coffee shops and now sex workers are getting more massages than we are,’ he complained. ‘It’s more about red tape than red lights nowadays, innit?’