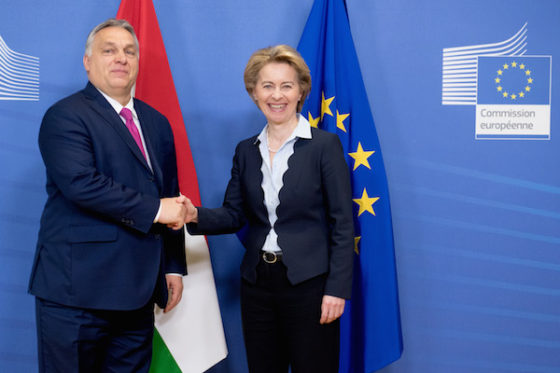 The Netherlands is one of 13 EU member states which have signed a joint statement criticising Viktor Orban’s power grab in Hungary but which does not mention the country by name.

In the statement, EU foreign ministers say they are ‘deeply concerned about the risk of violations of the principles of rule of law, democracy and fundamental rights arising from the adoption of certain emergency measures.’

The statement is being seen as a veiled attack on Hungary, where prime minister Viktor Orban’s two-thirds parliamentary majority has granted him indefinite and sweeping emergency powers.

The rule of law, democracy and fundamental rights must remain strong principles of our societies, also in times of #coronavirus.

NL with several others support the @EU_Commission in monitoring emergency measures and their application. Joint statement: https://t.co/Cnp0RdFum5

‘Emergency measures should be limited to what is strictly necessary … They should not restrict the freedom of expression or the freedom of the press,’ the statement says, before calling on the European Commission to ‘ensure the fundamental values of the Union are upheld.’

On Tuesday commission president Ursula von der Leyen called on member states not to weaken fundamental rights and democratic values in their fight against the coronavirus. But she too did did not name Hungary in her statement.

Moves are also underway to expel Orban’s party Fidesz from the European People’s Party conservative grouping with the European parliament. Dutch Christian Democrat MPs are part of the EPP, as is Von der Leyen.

Donald Tusk, former president of the European council, has written to members of the EPP warning them they will have to take action against Fidesz.

In the letter, obtained by euronews, EPP president Tusk describes Orban’s decision ‘make use of a pandemic’ to impose a permanent state of emergency in Hungary as ‘morally unacceptable’.

Exclusive: revised letter by @donaldtuskEPP calling on @EPPGroup to ‘reconsider’ and expel #Fidesz.
Says #Orban’s action to impose a permanent state of emergency in #Hungary is “morally unacceptable”. @euronews pic.twitter.com/ylxnfjh9Ge

In 2019, the CDA did back calls for Fidesz to be expelled, saying Orban had been acting in striking contradiction to the party’s ideals.

D66 MP Sjoerd Sjoerdsma has described the situation in Hungary as that of a ‘quasi dictatorship.

Hungary should be put in ‘political quarantine’ and stripped of its voting rights and excluded from European funding, Sjoerdsma said on Twitter.

Hungary’s ministry of justice told DutchNews.nl in a statement that ‘ordinary solutions and traditional approaches have manifestly proven inadequate,’ to dealing with the crisis.

‘We fully agree with the statement of 13 member states published yesterday that even in these challenging times we must uphold and defend the values of freedom, democracy, the rule of law and respect for human rights,’ the statement said, adding that it regretted Hungary had not been asked to sign.

The ministry suggested that an analysis of member states’ different approaches to exceptional measures could take place when the worst days of the crisis are over.