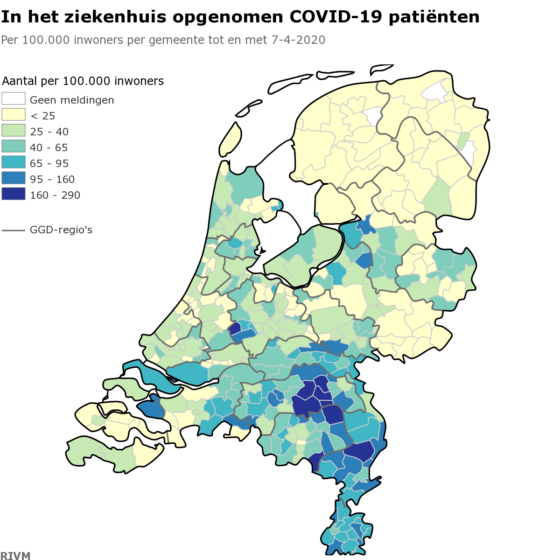 There was a sharp rise in the number of reported deaths from coronavirus in the Netherlands on Tuesday, as the death toll topped 2,000.

A further 234 people have died from the virus, taking the total to 2,101, the public health institute RIVM said in its daily update. This figure includes deaths which took place over the weekend and had not yet been included in the totals, the RIVM said, adding that figures are always higher on Tuesdays. On Monday, the institute reported 101 deaths.

Overnight hospital admissions rose by 292 to 7,427, which is also up on Monday’s figure. But the number of positive tests continues to decline. In total, a further 777 people have tested positive for coronavirus, taking the total number of infections to almost 20,000.

New intensive care figures are published later in the afternoon, but the government has said agreement has been reached on using 107 intensive care beds in Germany. In total, 37 people from the Netherlands are currently being treated over the border.

Despite some pressure on ministers to state how they will start to wind down the ‘intelligent lockdown’ after the May school holidays, officials have said it is still far too early to present any form of exit strategy.

Prime minister Mark Rutte is due to hold a press conference at 7pm on Tuesday to outline any new steps the government is taking to stop the spread of the disease.

Insiders do not expect any major news, but say more details may be given about the testing programmes.

The current package of measures are set to remain in force until April 28, and prime minister Mark Rutte said last week more clarity will be given about extending them by April 21. Schools will remain closed at least until after the May holidays which finish on May 3 or May 10, depending on the region.

Hope of a relaxation in the rules is being largely pinned on an increase in the amount of testing in the Netherlands. Capacity is now being quadrupled, although tests will still focus on health service workers.

Various projects are also underway to assess the spread of coronavirus in the Netherlands.

The RIVM and blood bank Sanquin are carrying out testing for antibodies, Erasmus University teaching hospital has an ongoing research programme for antibodies and Leiden University is testing patients who come to the hospital for non-corona related reasons, broadcaster NOS said.

The first results from the various projects are due later this month.