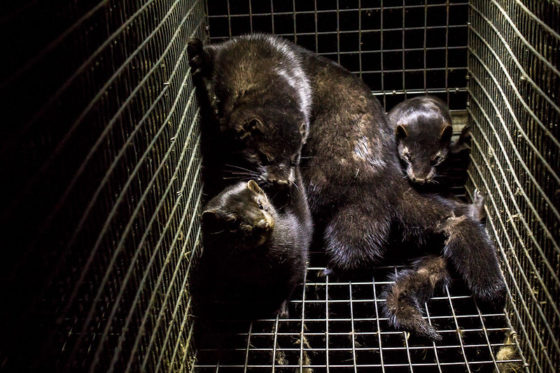 Mink on a fur farm. Photo: Dzīvnieku brīvība via Flickr

Covid-19 has been confirmed in mink at two fur farms in the Netherlands, the agriculture ministry confirmed on Sunday.

The animals were tested after developing a variety of symptoms including breathing difficulties and because there was a higher than normal death rate, the ministry said in a statement.

Officials decided to test the animals after several workers at the two farms were also found to have coronavirus symptoms, although they had not been tested for the disease.

The farms, with over 20,000 mink between them, are in Beek en Donk and in Milheeze, both of which are in Noord-Brabant, the epicentre of the Dutch outbreak and the heart of the Dutch mink industry.

The public health institute RIVM has sealed off an area some 400 metres around each farm to walkers and cyclists as a precautionary measure, while saying there is no risk that the virus could be spread to humans. However, air and other samples are being take to check if the virus is spreading and to find out more about it has moved among the animals themselves.

‘There are currently no indications that pets or farm animals have a role in spreading Covid-19,’ the ministry said.

Farm minister Carola Schouten has introduced a reporting requirement for all mink farmers and vets, which means any suspicious illnesses must be reported to the authorities.

According to the ministry statement ‘earlier research’ has shown that ferret-like animals such as mink are susceptible to coronavirus infections.

There have been a few other reported cases of coronavirus in animals, including a tiger in New York and two cats in Hong Kong.

According to Wageningen University, coronaviruses do occur in various animal species but these are different strains to Covid-19, mostly species-specific and non-zoonotic – which means they cannot be transferred to humans.

The Netherlands introduced a ban on fur farming in 2013 which includes an 11-year changeover period and Noord-Brabant is the centre of the Dutch industry.

In 2016, the Netherlands had some 160 fur farms producing five million pelts a year and the country was the third biggest fur farming nation in the world behind Denmark and China.