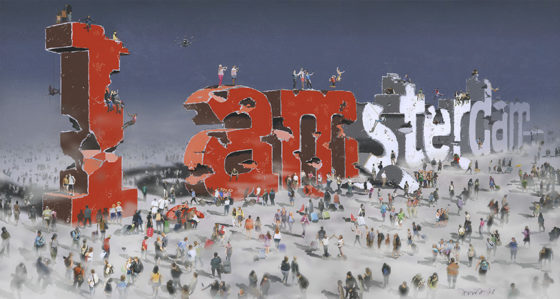 I Amsterdam by David Veldhoven

Amsterdammer David Veldhoen could not have been happier on the day the city removed the iconic IAmsterdam letters from the Museumplein in its efforts to combat overtourism.

‘The letters were for me a symbol of tourism, so I made this picture with the letters enlarged as a ruin,’ he explained of his mixed medium artwork I Amsterdam. ‘The tourists come up from the fog and also disappear in the haze while colonising the city. I’m very happy that the letters are leaving. It’s so fantastic to see an open field again behind the Rijksmuseum.’

That was in December 2018, the height of the holiday tourist season. The city and many of its residents had had enough with the record number of visitors that saw its population of 850,000 accommodate a staggering 17 million visitors last year.

‘If your only reason to come to Amsterdam is to get drunk and blow your mind out smoking pot, then don’t come. We don’t want you here,’ said the city’s former economics alderman Udo Kock at the time.

The city, saying it wanted to reclaim Amsterdam for Amsterdammers, enacted a number of controversial measures to discourage what were now being called ‘visitors,’ including relegating tourist buses to the outskirts of the city, halving the number of days residents could rent their homes on Airbnb and encouraging luxury travellers over lower-spending backpackers.

While some found the measures draconian, Amsterdam, like several other postcard-perfect mid-sized European cities (think Venice, Barcelona, Prague) was pulling out all the stops to deal with a surge in mass tourism created in part by budget flights, home-sharing sites, the worldwide economic upturn and an urban renaissance that many said was turning its fabled canal-laden capital into a tourist theme park.

Fast forward 18 months, and in an extreme case of ‘be careful what you wish for,’ the city is now virtually empty of tourists. Because of the corona virus, government measures have led to the closure of the city’s major sights and cultural institutions to at least June 1, including the Van Gogh Museum, Rijksmuseum the Anne Frank House, and Artis zoo.

With social gatherings banned for the time being, even King’s Day has been cancelled. Theatres, restaurants, bars and brothels have also been forced to close their doors, while the city’s famed cannabis coffee shops are doing take-out business only.

For the Van Gogh Museum, which depends heavily on ticket sales among other things to sustain itself, the impact of the virus is massive. ‘The museum never comments on financial details like how much we expect to lose,’ says a museum spokeswoman. ‘But the whole cultural sector, like the rest of society, is severely affected by this crisis. Since we generate 89% of our own income, the Van Gogh Museum is also suffering.’

‘The effect is huge,’ says Vera Al, spokeswoman for deputy mayor for finance and economic affairs Victor Everhardt. ‘There is no tourism, which means there’s no income from tourists.’

According to the city’s latest budget, tourist tax was expected to generate €197.9m for Amsterdam in 2020, a figure that is now unrealistic. Parking revenue, to which tourists contribute, was slated to bring in an additional €273.2m out of a total city budget of €6.3bn.

Research from the Amsterdam University-affiliated SEO Amsterdam Economics research agency estimated the total revenue for the Amsterdam economy from tourism in 2017 at €2.7bn, including wages and profits for local workers and businesses.

While it is too early to know exactly how the numbers will play out after the crisis, its impact on Amsterdam’s economy, said a city official, is ‘enormous.’

Freelance violist Kyra Philippi, who used to play for the Netherlands Philharmonic Orchestra, has had all her performances cancelled. She used to live in a historic canal house in the city centre until 2017, when the musician moved her family to Duivendrecht on the outskirts of Amsterdam to escape the noise from neighbouring Airbnb renters and the hordes of drunken tourists that were turning her picturesque city into an ‘open-air museum with no high and low season, just a high season.’

‘When I bike into the city now, it’s really empty,’ she says. ‘You don’t wish any city an overdose of tourism, but you wish them this even less. Maybe the city government will rethink some of its policies. Mass tourism presents extra risks, not only for tourists but for us as travellers.’

While the city government is busy dealing with the crisis, Al says its tourist policy remains the same. ‘We still want quality tourism,’ she says. ‘Overtourism is bad for some neighbourhoods and Amsterdam should remain liveable for its residents. The coronacrisis hasn’t changed this view.’

Zef Hemel, a professor of urban planning at Amsterdam University and sometimes advisor to the mayor, thinks the coronacrisis can be an opportunity to start again. ‘This very strange situation is kind of a timeout that could start us re-thinking the whole tourism business,’ he says. Hemel thinks a mix of increased sustainable tourism—wherein consumers become more conscious of their footprints—and entrepreneurship in the tourist sector will all lead to solutions.

‘Even the booking.coms and Airbnbs will have to refine their businesses, he says. ‘I believe we can learn from these shocks. After the post-war period, too, you had a situation where people came together and started collaborating in new ways to create a better society. This holds for any serious crisis.’

Artist Veldhoen, meanwhile, hopes the city’s future looks more like the past of his Amsterdam childhood. ‘The corona crisis is terrible, but in another way, the city looks beautiful, if a bit spooky,’ he says.

‘There’s no pollution because there’s no traffic. You can see the stars and the moon again. I hope that the inhabitants of cities like Amsterdam will take over their cities again and make them inhabitable for the students and artists and the people we need now—police, care workers, firefighters—who hopefully will be able to afford to come back.’