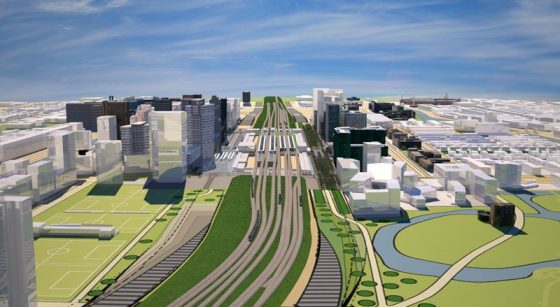 An artist’s impression of the finished project. Source: Zuidasdok.nl

Plans to tunnel in the southern edge of Amsterdam’s ring road and to expand the Zuid railway station will go ahead, but the tender process is being restarted, the costs will go up and it will take much longer to complete, transport minister Cora van Nieuwenhuizen has told MPs.

Dekker has now suggested splitting the project into smaller parcels and putting them out to tender individually. ‘Doing nothing is not an option,’ she said.

The extra cost may run as high as €1bn and the completion date has been put back to 2036, according to the new estimates.

Last year, the construction companies contracted to carry out the project said that the original €1bn contract is not enough to do the job and that delays will run up to five years past the original 2028 deadline.

And in the summer, a number of civil engineering experts raised doubts about the need to place part of the A10 underground, saying that the city’s plans to ban all but electric cars will make it unnecessary from an environmental point of view.

Others say the money would be better spent on developing a new ring road, further away from the city.

A consortium made up of Dutch construction group Heijmans, Fluor of the US and Hochtief of Germany won the preliminary contract for the project in 2017.