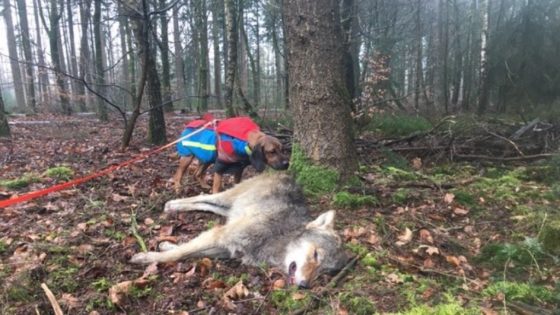 The dead wolf and the dog which tracked it down. Photo: Ger Verwoerd

A young wolf has been knocked down and killed by a car near Epe by the Veluwe heathlands, forester Ger Verwoerd from nature organisation Geldersche Landschappen & Kastelen has confirmed.

The wolf was hit on Wednesday morning and ran into the woods where it was later found dead. The driver had alerted police who used a specialist hunting dog to track the wounded animal.

The wolf, thought to be about a year old, will undergo a post mortem and dna tests to see if it is part of the litter of wolves born in the area last year.

At least five wolves were known to be living in the Netherlands at the end of 2019.

Since 2015 some 16 wolves have been spotted in the Netherlands, the Zoogdierenvereniging said last year. Four were killed in traffic, two crossed the border to Belgium, three settled in the Veluwe area, including two who had cubs, and four went back to Germany.

Wolves have protected status in the Netherlands but despite measures to compensate farmers for the loss of animals, their return remains controversial.