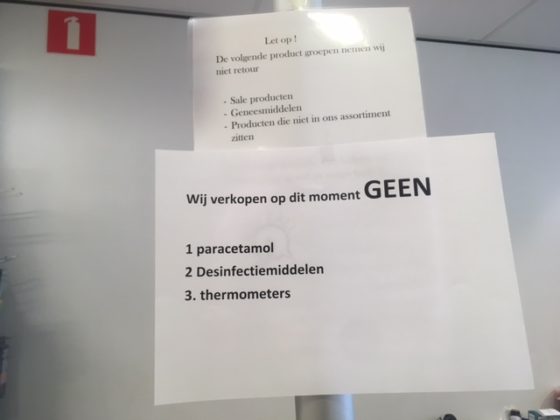 A sign at the till in an Etos chemists. Photo: DutchNews.nl

Some 50% to 60% of the 17.4 million people in the Netherlands would have to catch coronavirus to reach a level of group immunity, Jaap van Dissel, head of the public health institute RIVM, told television programme Nieuwsuuer on Monday evening.

‘We know this because of the characteristics of the way the disease is spreading,’ Van Dissel told the programme.

‘We want the virus to circulate among people who will have little problem with it, while at the same time, protecting vulnerable groups as much as possible. If a big enough group have had the virus, that will protect the vulnerable,’ Van Dissel said.

This, Van Dissel said, is why the government has opted for a programme of ‘maximum control’, as outlined by prime minister Mark Rutte in his speech to the national earlier in the evening.

By exerting maximum control, the infection peak can be leveled and the infections spread out over a longer period. Such a strategy also stops the healthcare system becoming overstretched, he said.

Total lockdown, as other countries such as France have imposed, is not the best option, he said. ‘As long as you put pressure on the spread, you have little disease, but as soon as you stop, the disease can bounce back,’ Van Dissel said.

In China, where new infection rates have plunged, only a tiny percentage of the population have had the disease, he said. ‘But the disadvantage of a total lockdown is that… you will remain sensitive to the virus being reintroduced.’

But some experts have slammed the Dutch approach, saying the Netherlands should be going for a total lockdown and making sure people stay in their homes – as is the case in Spain, France and Italy.

They also point out that the theory of mass immunity stems from the introduction of vaccines, not the spread of an actual disease.

American immunologist William Hanage, writing in the Guardian about the British approach to ‘herd immunity’ said: ‘This is not a vaccine. This is an actual pandemic that will make a very large number of people sick, and some of them will die. Even though the mortality rate is likely quite low, a small fraction of a very large number is still a large number.’

Government policy, he said, should be directed at slowing the rates to a more manageable level via strong social distancing.

‘Anyone who can work from home, should…. You should not shake hands. Not with anyone. You should wash your hands for 20 seconds several times a day and whenever you enter your home (or someone else’s home). Call a halt to large gatherings. Educate people about masks and how they should be reserved for the medical professionals who need them.’

Other experts have also suggested that what works in a strongly autocratic country like China would not work well in an open, free society like the Netherlands.