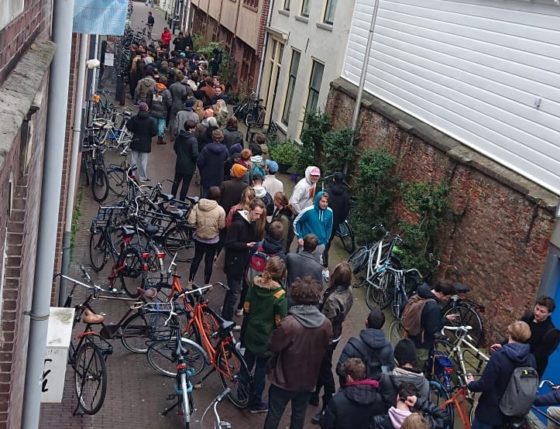 People queuing in front of a coffeeshop ahead of the announcement. Photo: Dexter

All schools and daycare centres in the Netherlands are to be shut from Monday until at least April 6 in an effort to prevent the spread of coronavirus, ministers decided on Sunday after a crisis meeting with health experts and education officials.

The move is a u-turn on Friday’s position, when the government said that schools and daycare centres should remain open so that essential workers can continue to do their jobs.

Bruins said the move to close cafes and bars had been prompted in part by ‘undesirable’ tourism from Belgium, which borders Noord-Brabant, the region of the Netherlands with the highest concentration of coronavirus cases.

Asked if air travel would be restricted, following countries such as Denmark and Spain, Bruins said: ‘I am certain that these are not the last measures we will take.’

He also said research was being carried out into Noord-Brabant into the risk of young people, who are less likely to fall ill with the virus, passing it on to others.

The death toll from coronavirus in the Netherlands rose to 20 on Sunday, the public health institute RIVM said in its latest update.

In total 162 people have been admitted to hospital, though the number who have been discharged is not known.

The number of positive tests rose 176 to 1,135. However, this says little about the rate of infection in the Netherlands because since March 12 testing has been restricted to people with serious rather than mild complaints.

Sjaak de Gouw, head of the Hollands Midden health board told broadcaster NOS that he expects the total number of infections in the Netherlands to be around 6,000, given the way the disease is spreading.

The prime minister will also make a televised address to the nation on Monday evening at 7pm.

‘The prime minister will talk about the difficult situation we find ourselves in, the need to take the measures which have been taken and possible further developments in the coming weeks and months,’ the state information service RVD said.

The last time a Dutch prime minister addressed the nation on television was in the 1970s during the oil crisis.