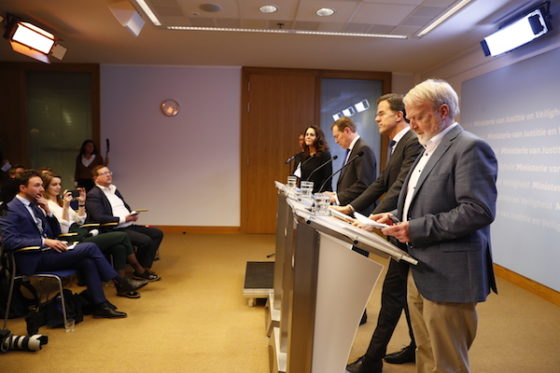 The Netherlands announced a new package of measures to combat the spread of coronavirus on Thursday but stopped short of ordering schools to close.

In particular, the rise in cases in Noord-Brabant province with no identifiable cause has prompted the rethink in the Dutch approach, prime minister Mark Rutte told a press conference following a crisis meeting with ministers and health officials in the early afternoon.

Measures introduced earlier in Brabant are now being extended nationwide and will run until the end of March. Brabant itself is expected to announce new tough measures to cover the entire province later on Thursday.

The new rules mean everyone who has a cold, cough, sore throat or temperature should stay home and avoid all social contacts, and phone their doctor if their condition worsens, health minister Bruno Bruins said.

In addition, all events involving over 100 people are being cancelled. This includes sports matches, conferences, theatre performances, church services and the like. Big museums will also be closed.

People are also being urged to work at home if possible, and companies are being asked to spread office hours over a longer period to reduce the number of people gathering in the same place.

Everyone is also being asked to limit contacts with the elderly and people whose health is vulnerable. The elderly are also being urged to avoid travelling on public transport.

Universities have been told to stop hosting large lectures and switch to online teaching instead. Schools, however, will not be closed.

‘There is no reason to close schools because they have had few infections,’ Rutte said. ‘Youngsters are not a big risk group.’

In addition, he said, the social impact of closing schools would be considerable because it would mean much needed healthcare workers would be forced to stay home to look after their children.

‘Closing schools would contribute very little to combating the crisis, but the impact on the healthcare chain would be major,’ Rutte said. ‘I appeal to teachers and school heads to understand that this is the most sensible option at the moment.’

Rutte dismissed criticism that the Netherlands had not been tough enough earlier in the epidemic. ‘We are doing what is necessary now,’ he said. ‘But we all need to do this together. The effect will be maximised if everyone does what we have asked.’

‘You never know if you are doing things right, but we are doing this based on expert advice,’ the prime minister said. ‘We have taken this decision based on the latest information and we are not ruling out taking further measures at a later date.’

The new measures have been prompted by overnight discoveries focusing on the virus in Brabant, Jaap van Dissel of the RIVM told the press conference.

‘The pressure on Brabant hospitals and intensive care units is increasing and they are having more trouble in coping,’ he said. In addition, local health boards are finding it increasingly difficult to check the chains of infection and find out how infections occurred.

There is also now a cluster in southern Limburg which probably came from Germany, Van Dissel said. Researchers at Erasmus teaching hospital in Rotterdam have studied the Brabant clusters and has found they have different sources of infection.

‘In Brabant, we  no longer have a grip on the disease and the period of containment, of isolating patients and tracing their contacts is over,’ he said. ‘We expect there are more cases under the radar.’

By contrast, in Groningen there are just two known cases so far.