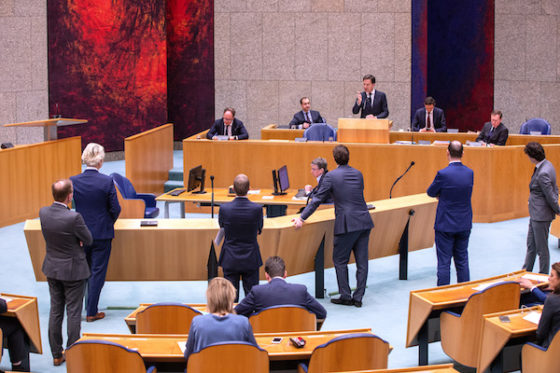 Dutch MPs have backed the government’s approach to handling the coronavirus outbreak in the Netherlands, with only the two far right opposition parties calling for a total lockdown.

And a vote to give healthcare personnel a bonus to thank them for their input was unanimously approved during Wednesday night’s debate on the crisis.

During the debate, which was closed to the public, health minister Bruno Bruins collapsed while speaking and had to be helped from the chamber. He said later on Twitter that he was exhausted and needed a good overnight rest.

Prime minister Mark Rutte again reiterated that group immunity is not the aim of Dutch policy and admitted that a misunderstanding had arisen after his televised speech on Monday.

In that speech Rutte said that the Dutch aimed to exercise maximum control over the virus. The aim, he said, is to try to spread the peak infection over a longer period, ‘while we build up immunity’. This means that hospitals and intensive care units are not overburdened and they have capacity to help the people most in need, Rutte said.

On Wednesday Rutte again stressed that group immunity is a ‘side effect’ of the strategy and the government’s aim is certainly not to ensure as many people as possible are infected.

‘The aim of our strategy is to makes sure the care sector can cope, that the elderly and the vulnerable are protected as much as possible,’ Rutte said. ‘A side effect of that is immunity, which is built up slowly and which will help, but which is not an aim in itself.’

Although MPs across the political spectrum said they supported the Dutch approach, Geert Wilders and Thierry Baudet, leaders of the two Dutch far right parties, both called for a total lockdown.

But Rutte said that this is not an option at the moment. The measures the government is already taking are ‘very similar’ to those in other European countries which say they are on lockdown, he said.

‘The Netherlands has been closed to a large extent,’ he said. ‘Look at cafes and bars and how use of public transport has plummeted… in France people are still going to work.’