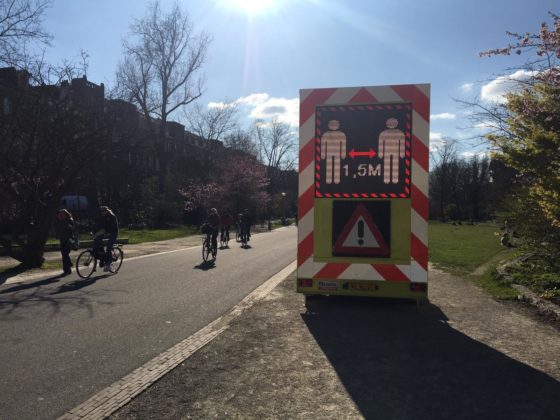 Keep your distance in the Vondelpark. Photo: Deborah Nicholls-Lee

Beach resort mayors, politicians and parliamentary speaker Khadija Arib have all called on people to stay home despite the spring weather, after thousands of people headed for parks, beaches and nature reserves.

Noordwijk mayor Wendy Verkleij said she was astonished ‘what few obligations’ people seem to feel to keep coronavirus in check. She urged people to stay home both today and ‘on all the other lovely spring days yet to come.’

The blazing sunshine is set to continue until Tuesday at least and the rest of the week will also have long sunny spells.

The mayors of Zandvoort and Bloemendaal have also called on people to stay home, as have officials on the Wadden Islands, and according to some reports, car parks at the beach have been closed.

‘The number of people on the beach is creating risky situations which no-one wants,’ the mayors of Zandvoort and Bloemendaal said in a joint statement. ‘It is crucially important that everyone keeps to the rules and we can manage the spread of coronavirus.’

Natural heritage group Natuurmomenten has called on people to stay out of the national parks and nature reserves because they too are becoming overcrowded.

Dutch railway company NS has also called on people not to use the train for days out at this time. ‘Leave the space in the train for the people who really need to use them, and keep your distance,’ the NS said.

DutchNews.nl readers have also been critical of the way people are flouting the rules. ‘I’m noticing that people don’t respect the social distance in supermarkets and the staff does nothing to regulate this. I think we need rules imposed on supermarkets, because we cannot think that people follow simple advice,’ one trainee doctor on an  internship in Rotterdam said.

An expat from Italy, told us: ‘I am getting more and more outraged every passing day with how little awareness many Dutch seem to have on the actual dangers of coronavirus and on why it’s so important to take it seriously.

‘I’ve been religiously following the grim updates on the death toll and number of infected in Italy. It’s so shocking that it’s hard to believe, and what’s most shocking is that 20 days ago Italy was as carefree as the average Dutch is now.’

The Dutch government has not said people should stay home unless they have mild symptoms, but has recommended people stay at least 1.5 metres apart.

Neuropsychology professor Erik Scherder told the Telegraaf he had a hard time understanding how people can still be comfortable in crowds. ‘If you go to the supermarket you can keep at a safe distance from each other. But at a party? It is obvious that the closure of bars and restaurants was a necessary measure, seeing how happy people still were to visit them.’

The lack of awareness is ‘worrying’ Scherder said. The pandemic is not yet the main focus of attention for many and too many young people still think the virus will only affect the elderly. ‘They forget that the vulnerable are the reason that they need to change their behaviour,’ he said.

According to the neuropsychologist, four things are needed to change people’s behaviour. First is the awareness of the need for hand hygiene and second the commitment to the rules by everybody. Third comes focus. ‘We need to wake up every morning saying: these rules are the most important thing in my life right now. The fourth is a reward. ‘People like to be rewarded for good behaviour and in this case it saving lives – your own and that of others,’Scherder said.

‘That can mean different things to different people,’ she told the paper. Concrete recommendations are the way forward, she said. So ‘keep a distance of 1.5 metres’ is clear while health warnings that start with ‘it would be a good idea if’ are not.

Preventions and care specialist Marcel Verweij said that the large majority of people think they are doing their bit to prevent coronavirus from spreading. ‘They are saying: my children are at home, I hardly ever go out, I’m washing my hands more often, surely it’s ok to see my friend. I’m sure he’s keeping to the rules as well.’