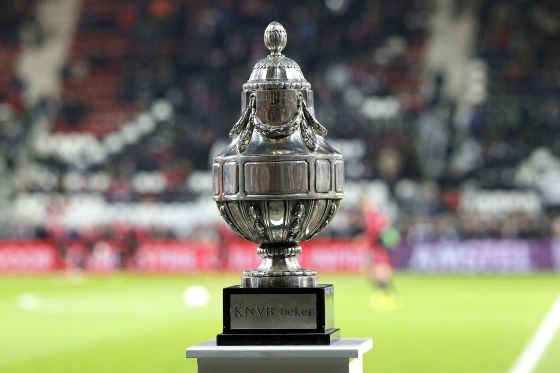 The cup final between Ajax and Utrecht as well as all league fixtures will have to be rearranged. Photo: KNVB

The Dutch football association KNVB says it is committed to playing out the Eredivisie season even though matches are unlikely to resume until May at the earliest.

The postponement of this summer’s European championships by FIFA gives national competitions until June 30 to conclude their fixtures. Most teams have eight games left to play, although the three title candidates Ajax, AZ Alkmaar and Feyenoord have an extra match to fit in. The cup final between Ajax and Utrecht also needs to be rescheduled.

The KNVB’s preferred option is to complete the fixtures before June 30, with matches being played in closed stadiums if necessary. Organised events and mass gatherings are banned until June 1.

Under the government’s current rules all sports clubs are closed until April 6 and training in groups of more than 3 is prohibited, meaning training sessions cannot take place. Support staff such as physiotherapists are also working under strict constraints. After April 6 the association will assess whether clubs can reopen their facilities and restart their competitions in May or June.

‘Although sport is not a main priority in these difficult times, we need clarity first of all,’ the association said on Tuesday following a meeting of administrators. ‘The health ministry has confirmed that the [public health agency] RIVM’s advice relating to sports clubs is unchanged, and will run till April 6 and not June 1 as was generally thought initially.’

The KNVB says clubs will be able to complete the season in June if they play two matches a week. Alternatively the association could apply to European football’s governing body UEFA to extend the Eredivisie season beyond the end of June, but amateur competitions will not be extended.

In the worst scenario, the season would be abandoned and no title awarded. The European places would be filled on the basis of the current standing, with league leaders Ajax playing in the group stage of the Champions League. AZ Alkmaar would enter the Champions League qualifying round, with Feyenoord, PSV Eindhoven and Willem II Tilburg competing in the Europa League.

No teams will be relegated if the season is unfinished. Instead Cambuur Leeuwarden and De Graafschap Doetinchem will be promoted and the Eredivisie expanded to 20 clubs for one season.