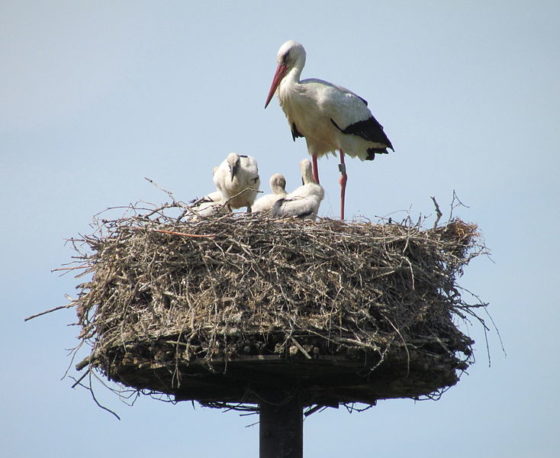 A file photo of a Dutch stork’s nest. Photo: Apdency via Wikimedia Commons

A pair of nest building storks are proving to be a headache for railway operator ProRail because they have built their nest on a pole supporting an overhead cable at Meppel station, local broadcaster Omroep Drenthe reports.

The nest is above a set of points which is used to switch tracks. This is, says ProRail spokesman Michel van den Bogaert, an inconvenient spot because the birds drop branches as they are building their nest and that causes the points to fail.

An earlier attempt to remove the nest failed because the storks, who are prone to return to spots they like, came back and built another one.

Storks are protected in the Netherlands and if they have produced eggs, there is nothing ProRail can do.

But until they have ProRail says it will continue its attempts to remove the nest. ‘We have permission from the provincial authorities to do this provided we hurry it up and that an ecologist accompany us to check for eggs,’ Van den Bogaert said.

Stork nests are protected too, even when the owners are not around, stork expert Frits Koopman told the broadcaster, and the legal requirement is that there must be an alternative nesting place on offer.

ProRail has said there are places near the local hospital but the storks are not inclined to move. ‘They like to do their own thing,’ Koopman said. ‘Older storks like to return to their former nesting places which they regard as their spot.’

Another five nesting poles have been placed in Koekange, some 12 kilometres away but there too the storks prefer the overhead lines. ‘That means storks are run over by train quite often, at least some ten to twelve times a year,’ Van den Bogaert said.