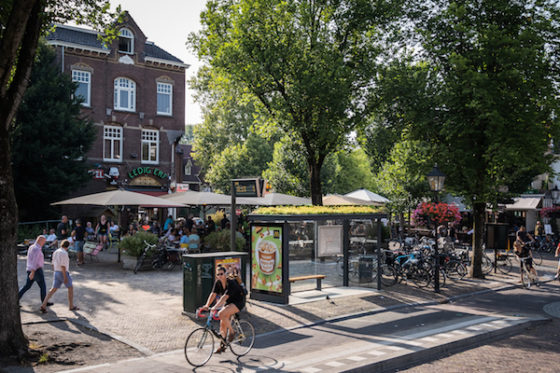 New build projects in Amsterdam would be forced to capture the first 60mm of rainfall thanks to proposals currently under public consultation.

The city, which today launches a ‘roadmap’ charting its way to becoming climate neutral, is also concerned about how the built environment absorbs ever-increasing rainfall.

A proposal, submitted in February, suggests that new builds will be obliged to ‘capture and process rainwater on their own ground, because the climate is changing and in the future ever heavier showers may fall.’

The obligation to capture and reuse rainwater – in features such as green roofs, water butts, and ‘grey water’ based sanitary facilities – is intended to help protect streets, cellars, houses and buildings from water damage.

New builds would be obliged to soak up the first 60mm of rainfall and only then ‘gradually’ release it into city drainage system over 60 hours.

Daniel Goedbloed, head of the water-management programme Amsterdam Rainproof, said that if the new rules are adopted, they would make a huge difference to the Dutch capital’s capacity to absorb water.

‘The idea is that all new builds, including those which don’t need to apply for planning permission, can deal with up to 60ml of water on their own plot of land,’ he told DutchNews.nl. ‘You could install a “blue roof” that acts like a temporary lake and then slowly drains water, or a “blue-green” roof with sedum plants and the ability to hold some water.

‘Rainwater harvesting systems can also be good, although they need to have water ready for the next use rather than draining it all away.’

The rule for these systems is that they must catch 90ml of water and drain away 30% of this in 60 hours, he said. Smart rainwater harvesting systems and so-called ‘polder’ roofing would be exempt, and developments which don’t need planning permission would have slightly lower requirements.

The costs would have to be borne by developers, although it is expected that on its own land, Amsterdam city council would offer a reduced ground rate for developers with rainwater harvesting measures in their plans.

The public consultation period runs until the end of April and the rain harvesting measure is expected to go to a council vote before the summer. Meanwhile, local rules in areas such as Oud-West already mean that owners can only tile 50% of their gardens in order to let rainwater soak into the ground.

The attention to rain is part of a drive to future-proof Amsterdam against climate change. The city’s plans to go climate neutral by 2030 – by better insulating homes and removing domestic gas – will reportedly cost ‘billions’ in investment.

Head of sustainability Marieke van Doorninck on Friday compared the future-proofing plans in Amsterdam to the level of change during the Industrial Revolution, and a report by CE Delft confirmed that the city may be able to reduce its emissions by 48% in 2030, compared with 1990.

Nika Haspels, a spokeswoman for Amsterdam city council, said that the rainwater proposals fall under this environmental drive. ‘This is part of the climate adaptation strategy,’ she said. ‘We have to do something: if you don’t ensure the rain is captured, then soon you are going to have a problem.’