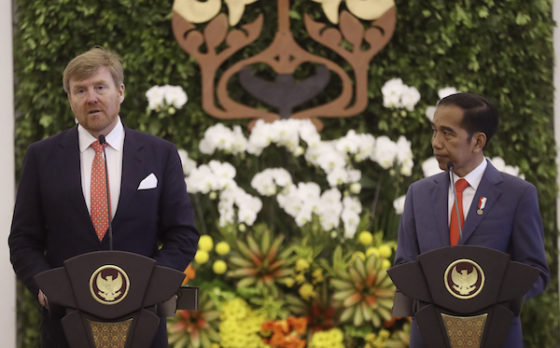 King Willem-Alexander has apologised to Indonesia for the violent excesses by Dutch soldiers during the Indonesian independence war of 1945-49.

The king, on his first official state visit to Indonesia, said in his speech that the past cannot be erased, and will have to be acknowledged by each generation in turn.

‘In line with earlier statements by my government, I would like to express my regret and apologise for excessive violence on the part of the Dutch in those years,’ the king said. ‘I do so in the full realisation that the pain and sorrow of the families affected continue to be felt today.’

However, he continued, ‘it is a hopeful and encouraging sign that countries which were once on opposite sides have been able to grow closer and develop a new relationship based on respect, trust and friendship.’

At the end of 2011, the Netherlands finally formally apologised for the massacre of hundreds of men and boys in the Javanese village of Rawagede in 1947 and in 2013, the Dutch ambassador to the Netherlands made a similar apology.

In 2015, prime minister Mark Rutte said he regretted the fact that Indonesian victims of the Japanese invasion during World War II feel misunderstood, but stopped short of apologising.

In 2016, the government commissioned a report into the decolonisation process, which has still not been completed.

The state visit, which also includes a large trade mission, runs until Friday. The programme has been adapted after a boat accident in the Sebangau National Park in which seven people died. The accident happened as preparations were being made to welcome the king and queen Maxima.