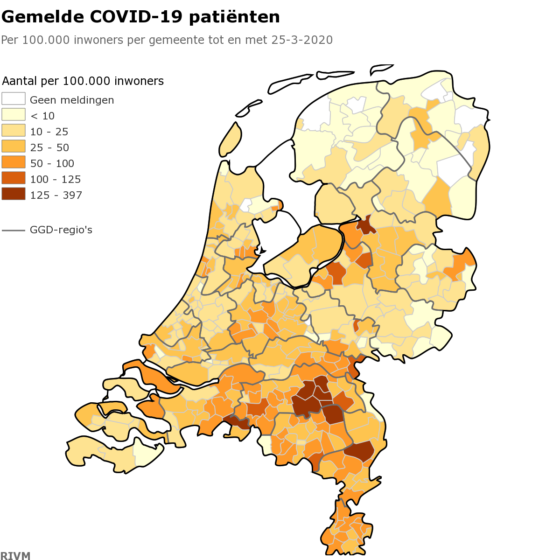 The number of people in the Netherlands dying from coronavirus reached a new high of 80 overnight, the public health body RIVM said in its Wednesday update.

Although the figure is high, the number actually involves people who died over the past few days, rather than a 24-hour total, the RIVM said.

Despite the sharp rise in deaths and positive tests, the RIVM says there is evidence that the rise in the number of hospital admissions is slowing which could indicate a slowdown in the speed of the virus spreading.

‘But we cannot draw firm conclusions and the coming days will show if the curve is flattening,’ the RIVM said.

Initial estimates show that the infection rate – the number of people infected by a carrier – is on or below one, rather than two to three as it was earlier, Van Dissel said. ‘The exponential growth of the outbreak would appear to have been halted.’

Meanwhile, the RIVM said it had identified coronavirus in waste water following sampling in Amsterdam, Tilburg and Kaatsheuvel, which processes water from Loon op Zand, where the first Dutch case was identified.

The RIVM has earlier detected norovirus, antibiotic-resistent bacteria, polio and measles in waste water. Tough Dutch rules on water purification mean that the virus is not in drinking water, the health body said.