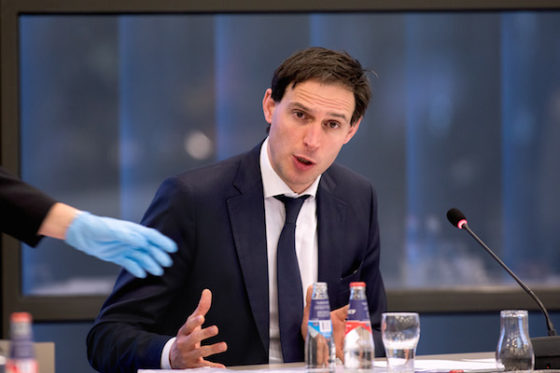 In a worst case scenario the coronavirus crisis could plunge the Dutch economy into deep depression, with GDP declining by up to 7.7%, the government’s macro-economic think-tank CPB said on Thursday.

The CPB has analysed four scenarios for the impact of coronavirus on the economy in 2020 and 2021, based on the duration of restrictions on physical contact and the severity of the economic impact.

‘The measures to contain the spread of the virus are necessary, but these will obviously also have a profound impact on the economy,’ CPB chief Pieter Hasekamp, said.

While much remains uncertain, ‘the longer the restrictions on physical contact remain in place and continue to deepen their impact, the greater the likelihood of problems in the financial system and of a deeper recession in other countries,’ Hasekamp said. This in turn, he said will further delay economic recovery.

In the mildest scenario, unemployment will increase only slightly in 2021, but in the most serious, it is projected to increase to 9.4%. ‘Government policy is aimed at limiting lay-offs and bankruptcies,’ Hasekamp said. The Dutch unemployment rate is currently hovering around 3%.

‘This is projected to prevent both a downward spiral and permanent economic damage,’ Hasekamp said, adding that government support will only be able to partially soften the blow.

The emergency measures to support the economy will cause a sharp deterioration in public finances, under all scenarios, the CPB said.

Nevertheless, there will not be a direct risk to the level of government debt, the CPB said. ‘Even under the worst-case scenario, by the end of 2021, the debt will be 73.6% of GDP, which is still far removed from levels identified as risky in the literature.’

MPs on Wednesday backed finance minister Wopke Hoekstra’s package of measures to help companies which have been hit by the restrictions on personal contact.

Hoekstra made a ‘moral appeal’ to companies not to misuse the compensation agreements, but said some abuse is unavoidable, given the speed at which the measures are being brought in.

The package is expected to cost €15bn in the first three months of 2020 alone.