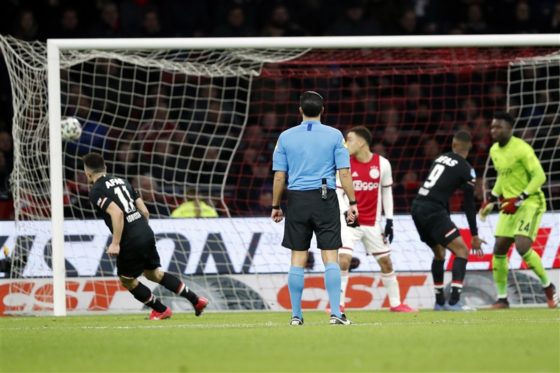 AZ Alkmaar blew the Eredivisie title race open with a richly deserved win in the Johan Cruyff Arena to draw level on points with leaders Ajax.

The visitors took a fourth-minute lead when Fredrik Midtsjø pounced on a mistake by Daley Blind and threaded the ball through to Myron Boadu, who fired low into the corner.

AZ had several good chances to add to their lead before Oussama Idrissi put the ball in the net in the 63rd minute, only for the VAR panel to rule that Boadu had handled in the build-up. But 10 minutes later Idrissi ran onto a long ball from Teun Koopmainers and lobbed the ball over Andre Onana’s head to make it 2-0.

Feyenoord and PSV remain tucked behind the front two after sharing the points in the Philips Stadium. Eric Botteghin headed in from a corner to put Feyenoord ahead on 33 minutes, but Cody Gakpo levelled the scores immediately after half-time with a low shot to end a run of seven league wins for Dick Advocaat’s side.

Willem II stay fifth thanks to a comfortable 3-1 win against Groningen. Che Nunnely, punishing some uncharacteristically slack defending, and Vangelis Pavlidis gave the Tilburgers a 2-0 cushion at half-time. Mats Köhlert wrapped up the points on 64 minutes before Ahmed El Messaoudi tapped in a loose ball from a corner to reduce the deficit.

RKC Waalwijk managed their first win since the turn of the year as they came from behind to beat Utrecht 2-1, but results elsewhere mean they are still 10 points away from safety. Sylla Sow and Darren Maatsen scored RKC’s goals in the last 20 minutes after Gyrano Kerk had given Utrecht the lead midway through the first half.

PEC Zwolle moved away from the drop zone after winning a seven-goal thriller with Vitesse Arnhem. Reza Ghoochannejad looked to have snatched the points for PEC with a penalty in the last minute, only for Oussama Tannane to silence the home fans as he lashed in a free-kick in injury time. But with seconds to play Pelle Clement capitalised on a mistake by Vitesse goalkeeper Remko Pasveer to head the ball into an empty net.

Heerenveen broke a six-match winless run in Enschede, but endured a nervous last 20 minutes as Twente came back from 3-0 down with a penalty from Haris Vukcic and a neat one-two finished off by Lindon Selahi.

Sparta raised their hopes of a second season in the Eredivisie with a handsome 5-1 win over Emmen. Henk Fraser’s side were 3-0 up in just over half an hour and although Michael de Leeuw gave Emmen hope early in the second half, an own goal and a close-range finish by Abdou Harroui sealed the points for the Rotterdammers.

VVV preserved their unbeaten start to 2020 in a goalless Limburg derby against Fortuna Sittard, who slipped to 16th place, while ADO Den Haag are six points further back after drawing a blank against Heracles.