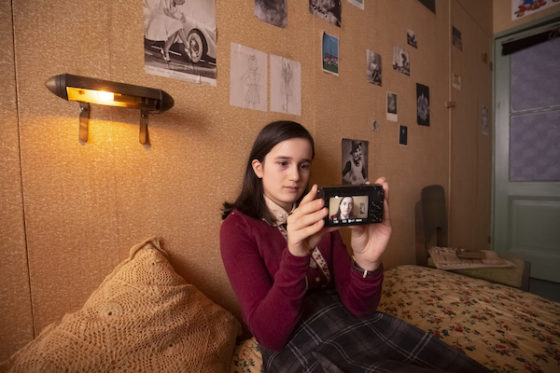 At a time when millions of youngsters have been confined to their homes, Anne Frank the diarist has become Anne Frank the YouTube vlogger in a 15 part series designed to attract a young audience across the globe.

The series, Dutch spoken and subtitled in English, German, Spanish and Portuguese, covers the period between March 29 and August 4 1944, the day that Anne was taken away by the Germans after the Frank family’s hiding place had been betrayed to the Nazi occupiers.

Anne was given her now famous diary, published after the war as ‘Het Achterhuis’ and translated into  over 70 languages, on her 13th birthday. Her letters to her fictitious friend Kitty proved a perfect outlet for her feelings about herself and the things that were happening around her.

Giving her a video camera to record her life is ‘a new and evocative way of approaching a new young audience with the story of Anne Frank at a time when reading is becoming less popular among teens,’  Anne Frank association director Ronald Leopold told public broadcaster NOS.

The role of Anne is played by 13 year-old Luna Cruz Perez, which also makes her more appealing to young people. ‘In films Anne is often played by older actresses and the perspective does not lie with her. Luna invites people to connect with her in a very direct way,’ Leopold said.

And coming at a time when many teens face not being able to go outside albeit for vastly different reasons, Anne’s restricted life may nevertheless also help them to identify with her.

Anne Frank’s friend Jaqueline van Maarsen, who is now 91, said she liked the project. ‘Replacing the diary with a camera will make it possible for young people to understand how things were then, in Anne Frank’s time. I needed a bit of time to get used to the idea but I think it’s good to bring Anne Frank’s story into the modern times.’