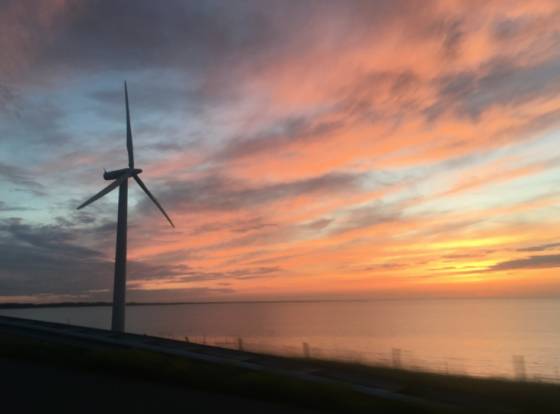 A wind farm in the province of Zeeland is the first to fit a system to switch off turbines automatically to guarantee the safety of nearby birds and bats, Omroep Zeeland reports.

Wind farm Krammer is situated near the Krammersluizen in the middle of three Natura 2000 protected nature reserves.

A number of the park’s 34 turbines have been fitted with cameras, microphones and loudspeakers, and mainly cover the area where the rare sea eagle hunts and breeds.

If the camera spots a sea eagle at a distance of 600 metres the turbine is stopped automatically. The detection system also cuts the power when other birds venture too near, such as cranes, spoonbills and great egrets.

The wind farm loses between €120,000 and €180,000 a year because of the stoppages. ‘It’s quite a lot of money. But we really want the birds to stay in the area, particularly the sea eagle,’ project manager Gijs van Hout told the broadcaster.

Not all birds manage to steer clear of the turbine blades but they are not dying in great numbers. The tip of the blades is 60 metres from the ground which means most birds pass underneath, ecologist Roland-Jan Buijs said. ‘But sea eagles mostly look down from higher up and the system was designed for them,’ Buijs explained.

Bats are detected by recording the ultrasonic sounds the animals make. Three such indications of the bat’s presence will stop the turbine until no ultrasonic sound is heard for the duration of 15 minutes.

It is rare for the park’s turbines to be working simultaneously on any given day and the park is keen to reduce energy loss. It may also employ loudspeakers to keep the birds from coming too close to the blades.

‘But we are still exploring that possibility. The question is what the effect of the sound will be on the birds which look for food and rest up at the foot of the turbines. If it chases them off we shouldn’t use it,’ Buijs said.