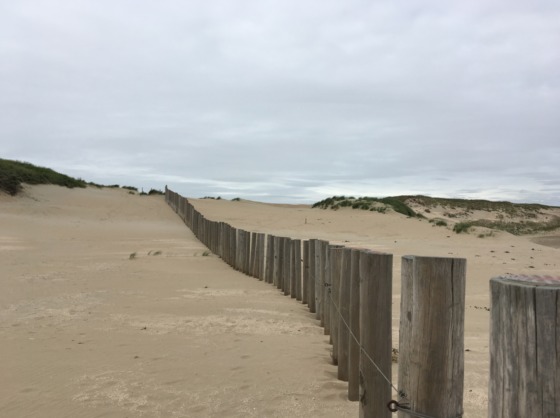 Storm Ciara has wiped out large swathes of beach on the Dutch coast but Rijkswaterstaat says sand suppletion is not necessary and would contravene nitrogen pollution rules, regional papers report.

Inspection of the beaches at Schoorl, Hargen and Camperduin in the province of Noord Holland had to be abandoned in the aftermath of this weekend’s storm because there was ‘no more beach to drive on’ and what there was had ‘turned into quicksand’, provincial waterboard inspectors told NH Nieuws.

Waterways authority Rijkswaterstaat said coastal safety is not compromised. ‘It looks pretty dramatic: almost no beach and dunes chopped off at right angles. But the sand is there, blown up into the dunes or under the water. It will accumulate again with the tide,’ a spokesman told the paper.

In Zeeland a number of ways in to the beach have been closed and local businesses are anxious for the authorities to bring in more sand so beach huts and beach bars can be ready for the summer. ‘It will be a tight squeeze for guests this summer otherwise,’ a local bar owner told regional broadcaster Omroep Zeeland.

Suppletion is not an option at the moment, however. ‘The machines we are using produce too much nitrogen compound pollution,’ a waterboard spokesman told the broadcaster.

‘But it is to be hoped that in dangerous situations such as we’re experiencing now, an exception will be made. The ministry needs to take action,’ he said.

MPs from the fundamentalist Christian SGP have called on the government to allow sand to be pumped up despite the nitrogen pollution norms.

‘The safety of people and animals are more important than the the nitrogen norms,’ MP Christ Stoffer said. ‘We think the beach at Walcheren needs to be repaired now and not after some lengthy procedure,’ he said.

The infrastructure said it will continue to monitor dunes and dykes along the Zeeland coast. Storm Dennis is expected to hit the Netherlands on Sunday.