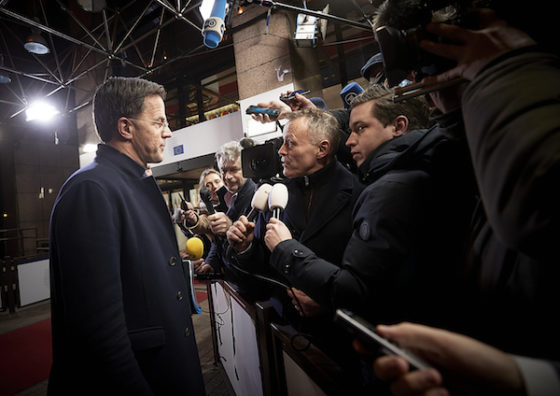 The Netherlands, Denmark, Sweden and Austria have formed a four-country block, dubbed the ‘frugal four‘ which is insisting the budget remains at 1% of GDP, despite Britain’s departure. Both the European Commission and parliament say the budget must go up in percentage terms.

Merkel was not the only leader to be irritated by Rutte’s refusal to budge during the negotiations, the paper said.

EU president Charles Michel also described Rutte’s refusal to compromise as ‘arrogance’, while Spanish leader Pedro Sanchez is quoted as saying: ‘does Rutte realise that I represent more people than his frugal four put together?’

EU civil servants have warned that such obstinacy has a price and that there are enough issues at play in Europe where Brussels can bite back. However, officials are well aware that Rutte is being kept in check by domestic concerns.

‘Let the dust settle,’ one diplomat told the paper. ‘In the end, the Netherlands will budge during a new EU summit.’

According to website EU Observer, the frugal four had identified around €20-26bn in spending that could be saved in the budget plans, and on cutting back the student exchange program Erasmus or free Interrail tickets.

But they refused to accept a compromise proposal from Michel, which would have allowed them to keep their rebates and cut the planned increase in the spending plans. This proposal was rejected across the board, EU Observer said.

Michel will now hold informal talks with member states in an attempt to get the negotiations moving again, before agreeing dates for more formal discussions.