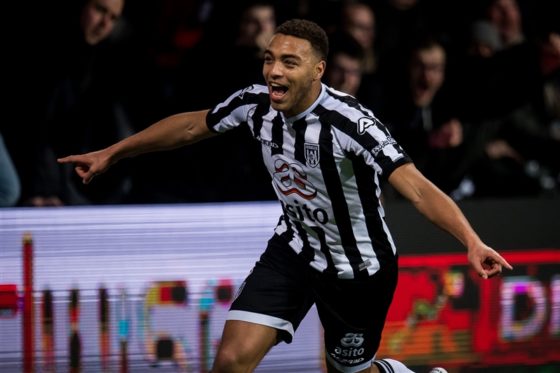 AZ Alkmaar have closed the gap at the top of the Eredivisie to three points after Ajax went down 1-0 to Heracles in Almelo.

Cyril Dessers’s thumping half-volley in the 76th minute gave Heracles their third successive home league win over the reigning champions, who looked to be suffering a hangover from their midweek defeat to Getafe in the Europa League.

AZ, who scraped a draw at home to Austrian side LASK on Thursday, were awarded three penalties against PEC Zwolle, two of which were converted by Teun Koopmeiners, while Feyenoord are now seven points behind the leaders after they beat Fortuna Sittard 2-1.

Steven Berghuis put Dick Advocaat’s side ahead from the penalty spot before Mark Diemers answered with a spot-kick of his own, but Feyenoord’s new signing Robert Bozenik had the last word when his shot was deflected into the net.

Advocaat, who recorded his 10th win in 12 Eredivisie matches since arriving at De Kuip in October, said: ‘It was very tough and a fortunate victory. We had slightly better chances, but in terms of territory they were no worse than us.’

PSV Eindhoven continued their recovery with a win in Arnhem, despite going behind when Tim Matavz punished a defensive howler by Daniel Schwaab, The visitors were handed a lifeline when Sam Lammers converted a soft penalty before Cody Gakpo decided the match with his sixth goal of the season.

Utrecht edged past Vitesse with a late comeback of their own at home to FC Twente, as Gyrano Kerk and debutant Jonas Arweiler both scored in the last 10 minutes to cancel out Giorgi Aboerdzjania’s 70th-minute opener.

Willem II’s poor form since the winter break continued as they were well beaten 4-2 in Emmen, who claimed their fourth successive home win to climb to 12th place.

At the other end of the table, RKC Waalwijk’s hopes are hanging by a thread after they lost 1-0 at home to Sparta, who boosted their own chances as Patrick Joosten scored the deciding goal after 32 minutes.

In Heerenveen, ADO Den Haag looked to be on their way to their first win under new coach Alan Pardew when they went 2-0 up in the first half. But Joey Veerman’s long-range shot and an exquisite chip by substitute Alan Halilovic, on loan from AC Milan, rescued a point for the Frisians.

VVV pulled further away from the relegation zone and stretched their unbeaten run to six matches with a 1-0 win in Groningen. Oussama Darfalou pounced on a late misjudgment by Groningen’s goalkeeper to head into an empty nef in the 87th minute.