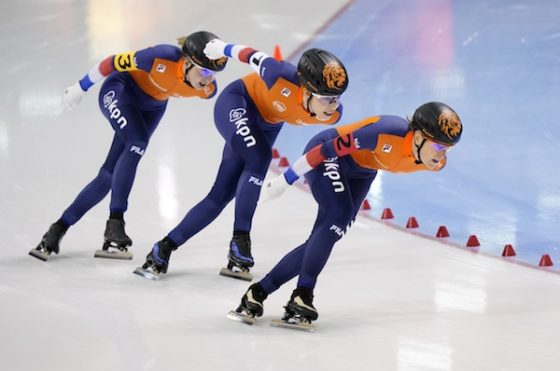 The women’s pursuit team on their way to gold. Photo: Soenar Chamid sportfotografie via HH

A flurry of gold medals on the final day of the competition put the Netherlands once again firmly on top of the table at the world single distance speed skating championships in Salt Lake City.

With seven gold, five silver and two bronze, the Dutch skaters held off strong competition from Russia and Canada, who did pick up six golds between them.

Both the women’s and the men’s team pursuit teams took gold as well.

There were also victories for Dutch skaters at the World Cup short track championships in Dordrecht. Suzanna Schulting retained her 1,500 metre world title in a dramatic race, Lara van Ruijven took gold in the 500 metres and the Dutch women also won the 3,000 metre relay.