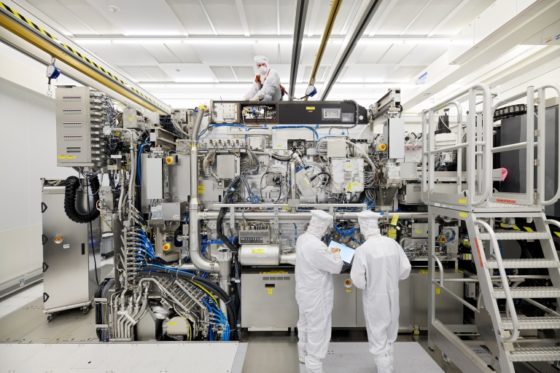 An ASML cleanroom where a euv machine is being assembled. Photo: ASML

The US ambassador to the Netherlands has confirmed earlier reports that the United States wants to discourage the export of chip technology to China, the Financieele Dagblad said on Friday.

Sources had told the paper earlier that the US was putting pressure on the Dutch government to refuse an export licence to chip machinery maker ASML.

‘We have made it very clear to the Dutch,’ the paper quotes Pete Hoestra as saying. ‘We believe that this is extremely sensitive technology which does not belong in certain places.’

ASML has been waiting since June 2019 for an export licence to send a next-generation chip maker to China, which uses technology based on extreme ultraviolet (euv) wavelengths.

The request is still being dealt with by the foreign affairs ministry. However, behind the scenes, the FD says, the US has been subjecting the Netherlands to ‘heavy political pressure’ to refuse the licence.

Earlier this week, China’s ambassador to the Netherlands said in an interview with the FD that China did not want The Hague to bow to US pressure.

‘We are concerned that the Netherlands is allowing our trading relationship to become politicised,’ Xu Hong is quoted as saying. ‘If this continues, it will ultimately have a negative influence on our bilateral relationship.’

The paper said the stakes are high because ASML is counting on realising billions of euros worth of sales in China through the use of euv technology.

The technology falls under an international treaty, the Wassenaar Arrangement, which was signed by both countries and which stipulates that a licence is necessary because euv technology can also be used for military purposes.