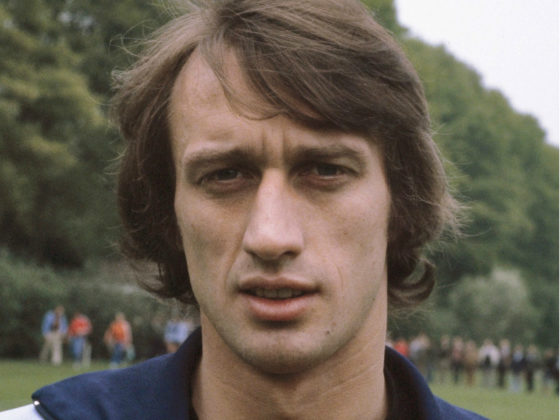 Tributes have been paid to Rob Rensenbrink, who came closest of any Dutch footballer so far to scoring a World Cup winning goal, after his death at the age of 72.

Rensenbrink, who played 46 times for Oranje, scoring 14 times, was diagnosed in 2012 with the muscular degenerative disease PSMA.

Born in Amsterdam, he spent most of his professional career in Belgium with Club Brugge and Anderlecht, where he earned the nickname ‘Slangenmens’ (snake-man) for his mazy runs.

But his most famous footballing moment came in 1978, when he stretched to meet a cross in the last minute of the World Cup final in Buenos Aires only to see the ball cannon off the post. The Dutch went on to lose 3-1 to host nation Argentina in extra time, in a tournament used as a PR showcase by the ruling junta.

Rensenbrink said later he had no regrets about the missed chance. He scored five goals in Argentina, including a hat-trick against Iran, making up for his disappointment in the 1974 final when he was taken off at half-time with an injury. On that occasion the Netherlands lost 2-1 to Germany.

Rob Rensenbrink, who hit the post in the last minute of regular time in the 1978 World Cup final with Holland-Argentina tied at 1-1, died today aged 72. “The snake man” probably preferred fishing to football. RIP https://t.co/OWp5VukWCX

With Anderlecht he twice won the European Cup Winners’ Cup, scoring twice in the 1976 final against West Ham United. Two years later he repeated the feat and set up the other two goals in a 4-0 win over Austria Vienna.

Veteran commentator Jack van Gelder described Rensenbrink as a ‘fantastic footballer and a remarkable person’, while broadcaster Frits Barend said he had been a ‘majestic left-winger, the star of Anderlecht, and almost made the Netherlands world champions in 1978’.